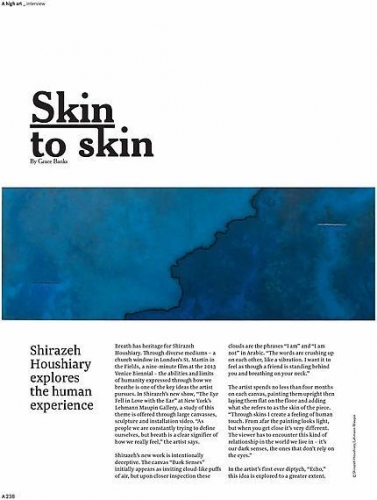 Skin to Skin
By: Grace Banks


Breath has heritage for Shirazeh Houshiary.  Through diverse mediums - a church window in London's St. Martin in the Fields, a nine-minute film at the 2013 Venice Biennial - the abilities and limits of humanity expressed through how we breathe is one of the key ideas the artist pursues. In Shirazeh's new show, "The Eye Fell in Love with the Ear" at New York's Lehmann Maupin Gallery, a study of this theme is offered through large canvasses, sculpture and installation video.  "As people we are constantly trying to define ourselves, but breath is a clear signifier of how we really feel," the artist says.

Shirazeh's new work is intentionally deceptive.  The canvas "Dark Senses" initially appears as inviting could-like puffs of air, but upon closer inspection these clouds are the phrases "I am" and "I am not" in Arabic.  "The words are crushing up on each other, like a vibration.  I want it to feel as though a friend is standing behind you and breathing on your neck."


The artist spends no less than four months on each canvas, painting them upright then laying them flat on the floor and adding what she refers to as the skin of the piece.  "through skins I create a feeling of human touch.  From afar the painting looks light, but when you get close it's very different.  The viewer has to encounter this kind of relationship in the world we live in - it's our dark senses, the ones that don't rely on the eyes."


In the artist's first ever diptych, "Echo," this idea is explored to a greater extent.  What looks like a landscape with clear boundaries is actually a series of fine lines rendered with military precision.  Was this intentional?  Absolutely.  "I want people to think the line in 'Echo' is a boundary, but it isn't.  It's just a zone of darkness that connects the two colors."  On top of these paintings, there's a dusting of the artist's own fingerprints in white.  The effect is unnerving and changes the narrative of the work completely, transforming the viewer into a key part of the piece.


"Dust," a seven-minute video installation, invites the viewer into a soprano chant reminiscent of a sermon.  again the concept of tempo is strong.  "The vibration of speech changes as we talk, as we sing and move."  In the same way that the artist's 2013 Venice Biennial film Breathe was a testament to the metaphysical properties of speech, "Dust' explores the human condition through words.


In contrast to the openness of Shirazeh's paintings, three sculptures testify to her interest in the austere abilities of digital art.  "Eddy" is a real-life incarnation of a digital double helix graphic pushed to its utmost form in anodized aluminum.  Part of a series, these pieces stand out with their simplicity.  Through them Shirazeh explores the body as the locus of our experience, and how we use it to connect with the vast world we live in.