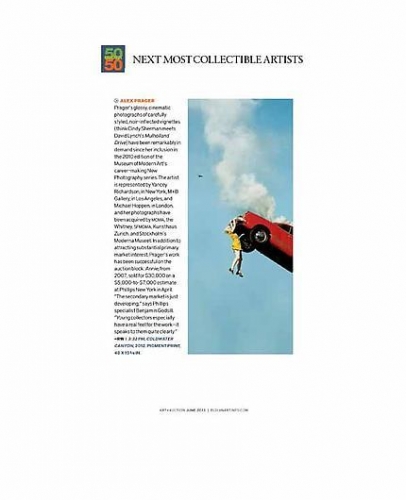 50 Under 50: The Next Most Collectible Artists


Last year we set out on what some might call a fool’s errand by selecting the 50 most collectible living artists. Hoping to elevate this sort of list-making beyond a parlor game, we defined the parameters and embarked on research to find those artists who have a proven record in the market and also show promise of the continuing innovation and devotion to craft that will warrant attention for decades to come. The result was a list that peered beyond the headlines.

A year is no time at all in the long game that is serious collecting. For this second outing we decided to add to the challenge by focusing on artists under the age of 50. For such a group, auction stats can be erratic, and artists may just be adding a major museum solo to their exhibition history.


But what follows is not an “emerging” artist list in the style of many art magazines, naming favorites from the latest MFA graduating class. Most names will be familiar to readers from years of gallery shows and even awards. The vast majority among the final selections are in their 30s, because the reality is that artists are still coming into their practice through their 20s, and only after that begin to build a committed collector base. Readers will also note the preponderance of painters. In the discussions during which we hashed out the list, two reasons for this emerged. First, there is a genuine resurgence of nonrepresentational painting as artists under 50 reexamine that key modernist pursuit. Second, collectors perennially favor painting because it is understandable within an established tradition and is comparably easy to display and conserve.

Diversity is the other big trend seen in this list, in terms of geography as well as in the individual artists’ practices. The language of contemporary art is global, and collectors are increasingly interested in seeing differences in dialogue. Today artists may be born in the Middle East, live in Europe, and sell to collectors in Asia and America, and our list reflects that ubiquitous internationalism. Just as pervasive, it seems, is the desire among artists to operate free of the constraints of medium. Even as recent years have seen a return to a focus on craft and the object and, sometimes, beauty, it seems that the ultimate triumph of Conceptualism has come in the form of younger generations who embrace the artist’s role as that of universal creator. Photographers sculpt, sculptors bridge the divide between two and three dimensions, and painters make films. Innovation is everywhere.

Prager’s glossy, cinematic photographs of carefully styled, noir-inflected vignettes (think Cindy Sherman meets David Lynch’s Mulholland Drive) have been remarkably in demand since her inclusion in the 2010 edition of the Museum of Modern Art’s career-making New Photography series. The artist is represented by Yancey Richardson, in New York, M+B Gallery, in Los Angeles, and Michael Hoppen, in London, and her photographs have been acquired by MoMA, the Whitney, SFMoMA, Kunsthaus Zurich, and Stockholm’s Moderna Museet. In addition to attracting substantial primary market interest, Prager’s work has been successful on the auction block: Annie, from 2007, sold for $30,000 on a $5,000-to-$7,000 estimate at Phillips New York in April. “The secondary market is just developing,” says Phillips specialist Benjamin Godsill. “Young collectors especially have a real feel for the work—it speaks to them quite clearly.”