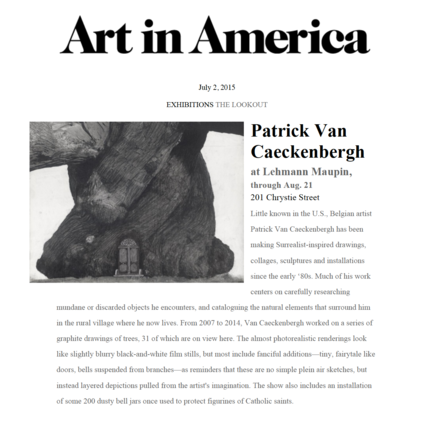 Little known in the U.S., Belgian artist Patrick Van Caeckenbergh has been making Surrealist-inspired drawings, collages, sculptures and installations since the early ‘80s. Much of his work centers on carefully researching mundane or discarded objects he encounters, and cataloguing the natural elements that surround him in the rural village where he now lives. From 2007 to 2014, Van Caeckenbergh worked on a series of graphite drawings of trees, 31 of which are on view here. The almost photorealistic renderings look like slightly blurry black-and-white film stills, but most include fanciful additions—tiny, fairytale like doors, bells suspended from branches—as reminders that these are no simple plein air sketches, but instead layered depictions pulled from the artist's imagination. The show also includes an installation of some 200 dusty bell jars once used to protect figurines of Catholic saints.