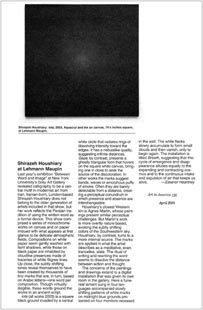 Last year's exhibition "Between Word and Image" at New York University's Grey Art Gallery revealed calligraphy to be a central motif in modernist art from Iran. Iranian-born, London-based Shirazeh Houshiary does not belong to the older generation of artists included in that show, but her work reflects the Persian tradition of using the written word as a formal device. This show comprised a series of monochrome works on canvas and on paper imbued with what appears at first glance to be delicate atmospheric fields. Compositions on white paper seem gently washed with faint shadows, while those on black paper are inhabited by cloudlike presences made of traceries of white filigree lines. Up close, the subtly shifting tones reveal themselves to have been created by thousands of tiny marks that are, in turn, based on Arabic letters--one word per composition. Though virtually illegible, these words ground the works in an ancient script.

Iota (all works 2003) is a square black ground invaded by a central white circle that radiates rings of dissolving intensity toward the edges. It has a nebulalike quality, suggesting infinite distances. Gaze, by contrast, presents a ghostly triangular form that hovers on the square white canvas, bringing one in close to seek the source of the discoloration. In other works the marks suggest bands, waves or amorphous puffs of smoke. Often they are barely detectable from a distance, creating a perceptual conundrum in which presence and absence are interchangeable.

Houshiary's closest Western kin is Agnes Martin, whose paintings present similar perceptual challenges. But Martin's work is more overtly nature based, evoking the subtly shifting colors of the Southwestern sky. Houshiary, by contrast, turns to a more internal source. The marks are applied in what the artist describes as a meditative, even trancelike, state. The ritual of writing and rewriting the word seems to dissolve the distance between action and thought.

The concerns of the paintings and drawings extend to a digital installation that was given its own room in the gallery. Here a funereal lament sung in four languages accompanied slowly shifting patterns of white marks on midnight blue grounds presented on four monitors recessed in the wall. The white flecks slowly accumulate to form small clouds and then vanish, only to begin again. The installation is titled Breath, suggesting that this cycle of emergence and disappearance alludes equally to the expanding and contracting cosmos and to the continuous intake and expulsion of air that keeps us alive.