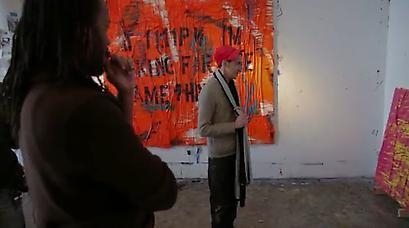 How do artists make a fair exchange of one artwork for another? In this film, artist Rashid Johnson trades a new sculpture with fellow artist Angel Otero, opting for a new painting at Otero's studio in Ridgewood, Queens. Friends and unabashed fans of each other's work since they both attended the School of the Art Institute of Chicago, the artists informally discuss the unlikely direction of Otero's new text-based pieces as well as a few easel-sized paintings. Otero's process involves applying thick layers of intensely saturated oil paints, peeling the sculptural "skin" off of a surface, and loosely draping the result over a canvas. In exchange for the piece Johnson picks, Otero selects a recent Johnson wall-mounted work: an angular wooden shelf piece, also representing a new "funky" direction in Johnson's work. Johnson and Otero carefully calculate what an appropriate exchange would be at this point in their careers—negotiating market demand for their works and the pragmatics of displaying art in cramped New York apartments—playfully but thoughtfully testing the boundaries of their social and professional friendship.