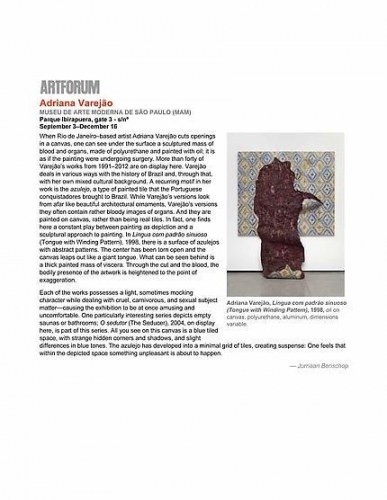 
When Rio de Janeiro–based artist Adriana Varejão cuts openings in a canvas, one can see under the surface a sculptured mass of blood and organs, made of polyurethane and painted with oil; it is as if the painting were undergoing surgery. More than forty of Varejão’s works from 1991–2012 are on display here. Varejão deals in various ways with the history of Brazil and, through that, with her own mixed cultural background. A recurring motif in her work is the azulejo, a type of painted tile that the Portuguese conquistadores brought to Brazil. While Varejão’s versions look from afar like beautiful architectural ornaments, Varejão’s versions they often contain rather bloody images of organs. And they are painted on canvas, rather than being real tiles. In fact, one finds here a constant play between painting as depiction and a sculptural approach to painting. In Lingua com padrão sinuoso (Tongue with Winding Pattern), 1998, there is a surface of azulejos with abstract patterns. The center has been torn open and the canvas leaps out like a giant tongue. What can be seen behind is a thick painted mass of viscera. Through the cut and the blood, the bodily presence of the artwork is heightened to the point of exaggeration.

Each of the works possesses a light, sometimes mocking character while dealing with cruel, carnivorous, and sexual subject matter—causing the exhibition to be at once amusing and uncomfortable. One particularly interesting series depicts empty saunas or bathrooms; O sedutor (The Seducer), 2004, on display here, is part of this series. All you see on this canvas is a blue tiled space, with strange hidden corners and shadows, and slight differences in blue tones. The azulejo has developed into a minimal grid of tiles, creating suspense: One feels that within the depicted space something unpleasant is about to happen.