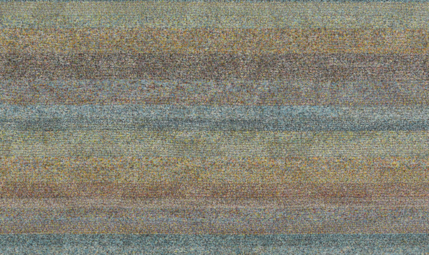 More than a thousand pounds of glass beads arrived recently to Liza Lou’s doorstep in Durban, South Africa. The New York-born artist, who has one of the most painstaking practices on the planet, was thrilled when she opened the package: “The colors were amazing!” she says of the tiny, .4 inch beads, which were crafted in Hiroshima, Japan. “Each bag was filled with saturated color: silvers and reds, coppers, pinks.” She laid the bags out across the floor and spent the next several days arranging them into various color combinations before pouring her final selections into a vat, the bands of colors blending like pigments in paint.

She then enlisted 27 Zulu artisans to weave the beads and sew them into long strips of random patterns. When they were finished a few weeks later, “I laid out all of the completed strips like long brush strokes, arranging them in different combinations, accepting and rejecting, cutting and reordering until I arrived at a picture that felt alive to me.” A group of master weavers then connected the strips and stretched them across bars to create each completed Color Field inspired canvas, six of which will travel to Lehmann Maupin gallery in Hong Kong for Lou’s show, January 19 through March 11.

The process involved “a tsunami of effort,” Lou says. “There was the decision not to make decisions and to allow for random color choices within a controlled palette.” Placing the strips involved a similar process of constraint and lack of constraint, “chaos and tweaky big-time control. The pattern makes a zig-zag that the eye can only follow for so long, and then rests on the horizontal of the individual strips. An image that you can never know by heart, no matter how many times you look.”