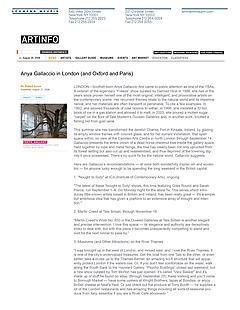 LONDON—Scottish-born Anya Gallaccio first came to public attention as one of the YBAs. A veteran of the legendary "Freeze" show curated by Damien Hirst in 1988, she has in the years since proven herself one of the most original, intelligent, and provocative artists on the contemporary scene. Her recurrent themes relate to the natural world and its impermanence, and her materials are often transient or perishable. To cite a few examples: In 1992, she allowed thousands of rose blooms to wither; in 1996, she installed a 32-ton block of ice in a gas station and allowed it to melt; in 2003, she poured a molten sugar "carpet" on the floor of Tate Modern's Duveen Galleries and, in another work, knotted a fishing net from gold lamé.

This summer she has transformed the derelict Charles Fort in Kinsale, Ireland, by glazing its empty window frames with colored glass, and for her current installation, that open space within, on view at the Camden Arts Centre in north London through September 14, Gallaccio presents the entire crown of a dead horse-chestnut tree inside the gallery space. Held together by rope and metal fixings, the tree has clearly been not only uprooted from its forest setting but also cut up and reassembled, and thus deprived of the towering dignity it once possessed. There's no quick fix for the natural world, Gallaccio suggests.

Here are Gallaccio's recommendations — at once both wonderfully insider-ish and eccentric — for anyone lucky enough to be spending the long weekend in the British capital.

1. "Nought to Sixty" at ICA (Institute of Contemporary Arts), ongoing

"The latest of these 'Nought to Sixty' shows, this time featuring Giles Round and Sarah Pierce, run September 1–8. Go Monday night for the latest fix. This series,which introduces little-known artists based in Britain and Ireland, has been really great — it's a simple but ambitious idea that has given a platform to an extensive array of thought and intention."

"Martin Creed's Work No. 850 in the Duveen Galleries at Tate Britain is another elegant and precise intervention. I love this space — its elegance and authority are deceptively tricky to deal with, but with this piece it becomes unexpectedly compelling to stand and wait for the next runner to pass by."

3. Museums (and Other Attractions) on the River Thames

"I was brought up in the west of London, and moved east, and I love the River Thames. It is one of the city's undervalued treasures. Get the boat from one Tate to the other, or even better, take a cruise up to the Thames Barrier, an amazing sci-fi structure that will apparently protect London if the waters rise. Or, if you don't feel comfortable on the water, walk along the South Bank to the Hayward Gallery. "Psycho Buildings" closed last weekend, but a new show curated by Tom Morton has just opened. It's called "View Basket" and it's made up of stuff he found on eBay (through September 28). Keep walking and you'll come to Borough Market — have some oysters at Wright Brothers, tapas at Brindisa, or enjoy British cheese at Neal's Yard. Or just check out the produce at Tony Booth — he supplies a lot of the London restaurants and has amazing things including all sorts of seasonal produce from Italy, essential if you are a River Cafe aficionado."

"This is the last weekend for this show of Gary Hume's door paintings. It's a stellar show — and well worth the trip. These paintings are Gary at his gorgeous best — slick and uncomfortable, seductive and agitated. I found it a real treat to see all this work again and a little unsettling to realize how long we have been friends."

"There's a Bridget Riley retrospective at the Musée d'Art Moderne de la Ville de Paris, which I've been told is even better than her 2003 Tate show and is a perfect excuse to take the train."

"Rough Trade East, on Dray Walk at the Old Truman Brewery at 91 Brick Lane, is always having free in-store concerts. The Breeders are doing one on Tuesday, September 2: Go byon Sunday morning before 11 a.m. to queue for a wristband. (They're one per person and will run out fast. Kim Deal ROCKS!) It's easy to wile away a couple of hours just looking through the racks in this shop, with music organized according to the artist or band's geography. If you miss out on Sunday, try to get to the show at Shepherd's Bush on September 3. The Breeders are not to be missed!"

"If you can face the crowds, go to Columbia Road for the flower market, which is another source of inspiration for me, and then on to Hackney City Farm for breakfast with the pigs!"