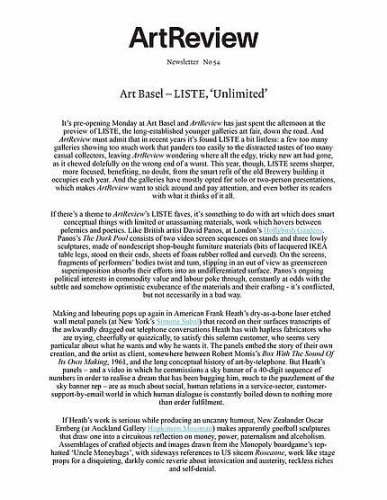 
‘Unlimited’ is a ritual of status display; selected by Art Basel out of applications from the fair’s participating galleries, who then pay for the privilege. It’s a sort of indicator of the kudos galleries think their artists have at a given moment. It’s also a kind of shop window for curators, simulating what the work might look like in a nice museum show.

It’s not too subtle, and given the size of the space and the fact that galleries are footing the bill, there’s always the risk of gigantism – blowing up the scale of a presentation for no particularly good reason, puffing up the art like a meringue. Particular offenders this year seem to fall into the category of big-name old timers, itself a bit of a trend, as galleries assert their claim on art history; Carl Andre’s tedious tract of metal floorplates Steel Peneplain, 1982, the late Hanne Darboven’s over-extended and indulged installation Kinder Dieser Welt, 1990–96, Jim Shaw’s daffy hanging ‘backdrop’ painting Capitol Viscera Appliances mural, 2011, and Giuseppe Penone’s massive barrier of stripped-back tree trunks standing on a carpet of leather skins Matrice di linfa (2008), all do a great job of getting in the way. With a certain generation of post-1960s artists starting to get really old now or finally shuffling off this mortal coil (the closing event in the talks programme is ‘In Honour of Elaine Sturtevant, 1930–2014’), the business of securing their legacies is hotting up.


The positive flipside of ‘Unlimited’ is nevertheless seeing the younger generation of artists having their growing reputations confirmed by their inclusion; biennial darling Hague Yang can do no wrong with her featherlight and playful cascade of multicoloured venetian blinds, at the entrance of the space, while Turner Prize-winner Laure Prouvost entertains with her loopy video narrative about her (fictional) Kurt-Schwitters-resembling artist grandad, Wantee (2013). Fictional narratives are equally consummately handled by Saskia Olde Wolbers in her eyepoppingly weird video Pareidolia (2011), a circuitous fable about a Japanese archery master and his German translator, in which what one chooses to believe is more powerful than what might actually be true.


Maybe it’s that the little rooms that much of the video works are presented in are more hospitable to paying proper attention to them, or it may be that a particular type of high-production video is now coming into its own in art – Alex Prager’s beautifully over-the-top mini-movie (starring American actress Elizabeth Banks, no less) Face in the Crowd, 2013, pastiches 1960s Hitchcock-era Technicolor, with Banks as the Grace Kelly-like blonde protagonist, lost in a bustling street throng of late-twentieth-century Americans, which, while losing itself slightly in its own camp revel, also – with its odd genre jump from documentary talking heads to movie melodramatics – sounds a strange note of sadness for a nation and a society whose raw metropolitan energy and sense of popular self-confidence appears now like distant history.


But no, it’s not just video that does well in these little rooms. Sculpture, too, needs time and space and a bit of quiet, away from the crowd on the boulevards: London-based group Troika’s metaphysically strange hanging sculpture Dark Matter (2014), a large black object that looks like a circle, a square or a hexagon depending on where you’re standing, probes (like Olde Wolber’s video) a very contemporary disturbance about the irreconcilability of subjective point-of-view and objective truth.


But maybe, ArtReview thinks, art doesn’t need to worry too much about reconciling the two, and is just as great when it accepts that aesthetic experience is what doesn’t correspond to a rational explanation of what’s in front of you. Okay, it may be the Ruinart talking, ArtReview muses as it contemplates the late Anthony Caro’s generous, optimistic sculpture River Run, 2013. It may be made of chunks of rusted welded steel angling around and traversed by a massive plate of frosted pea-green Perspex. But, as ArtReview looks at it, it starts to become something else; the experience of sunlight, playing on running water. Puzzled and a little giddy, ArtReview steps back out into the bustling throng of the artworld ‘favela’.