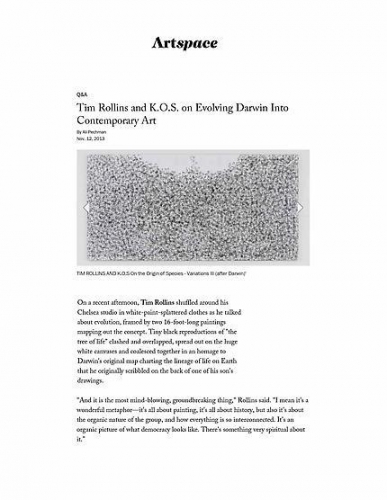 Tim Rollins and K.O.S. on Evolving Darwin Into Contemporary Art
By Ali Pechman


On a recent afternoon, Tim Rollins shuffled around his Chelsea studio in white-paint-splattered clothes as he talked about evolution, framed by two 16-foot-long paintings mapping out the concept. Tiny black reproductions of "the tree of life" clashed and overlapped, spread out on the huge white canvases and coalesced together in an homage to Darwin's original map charting the lineage of life on Earth that he originally scribbled on the back of one of his son's drawings.


"And it is the most mind-blowing, groundbreaking thing," Rollins said. "I mean it's a wonderful metaphor—it's all about painting, it's all about history, but also it's about the organic nature of the group, and how everything is so interconnected. It's an organic picture of what democracy looks like. There's something very spiritual about it."


Tim Rollins and K.O.S.—short for Kids of Survival, a program that the artist created to collaborate with at-risk high-schoolers in the South Bronx—have worked together for over 30 years to interpret dozens of works of literature and theory into artworks that have shown in 95 museums around the world, including MoMA, Tate Modern, and the Hirschhorn. The paintings re-imagining Darwin's sketch, which he made to first lay out the theory of evolution that became the core of his On the Origin of Species, mark the first time the collective has tackled the father of modern science. The wall-sized canvases, along with one slightly smaller version, are now on view at Lehmann Maupin Gallery through December 28. (For their last exhibition at the gallery, the group reinterpreted such works of literature as the Adventures of Huckleberry Finn, The Great, and The Rise and Fall of the City of Mahagonny.)


The Darwin works make for a particularly fitting metaphor for the ways in which K.O.S. has itself evolved and grown since its inception in 1984, when Rollins first began encouraging teenagers at his local school to make artworks as part of his Art and Knowledge Workshop initiative. Now original members of the group—which has been the subject of an Emmy winning documentary, "Kids of Survival: The Art and Life of Tim Rollins + K.O.S"—are adults with children of their own. On a recent afternoon just before the shows opening, early members Angel Abreu, Rick Savinon, and Jorge Abreu gathered at the studio with Rollins to put the finishing touches on the work.


"It hasn't changed much—it's actually gotten better," Savinon said of their group's approach to making art. "You see these two paintings in front of you and you can tell these guys know exactly where to be at the right time. It's a well-oiled machine.” Savinon was working on one of the studio's computers to map out how the exhibition would be laid out in the gallery. “Pretty much it's like a family, like how you come to a family gathering and know where to sit."


The two massive Darwin paintings, titled On the Origin, are accompanied by preliminary works by younger students at a school in Edinburgh, Scotland, that lies just 30 feet from Darwin's original studio. Traveling and touring around the world to find new collaborators has become the norm for the group: next year they will work with students at the Savannah College of Art and Design in conjunction with their exhibition at the college’s museum.


“We roll in like gangbusters,” Rollins said. “We come in strong.” Rollins is affable yet tough, quick to smile and equally quick to make his point. It’s a demeanor that served him well since he began to work with budding artists. Now participants in K.O.S. projects range from age 10 to 42, from the schoolchildren who made the initial sketches to the most senior members of the collective who have been in and out of the studio with Rollins this fall for the current exhibition.


“You see the genesis and then you see the result." Rollins said of the overall experience of the work at the gallery. He adds, for good measure, "That's how we roll."