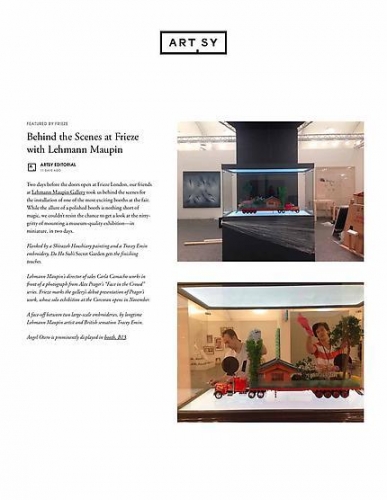 Behind the Scenes at Frieze with Lehmann Maupin
By: Artsy Editorial


Two days before the doors open at Frieze London, our friends at Lehmann Maupin Gallery took us behind the scenes for the installation of one of the most exciting booths at the fair. While the allure of a polished booth is nothing short of magic, we couldn’t resist the chance to get a look at the nitty-gritty of mounting a museum-quality exhibition—in miniature, in two days.

Flanked by a Shirazeh Houshiary painting and a Tracey Emin embroidery, Do Ho Suh’s Secret Garden gets the finishing touches.


Lehmann Maupin's director of sales Carla Camacho works in front of a photograph from Alex Prager's “Face in the Crowd” series. Frieze marks the gallery’s debut presentation of Prager’s work, whose solo exhibition at the Corcoran opens in November.


Angel Otero is prominently displayed in booth, B13.