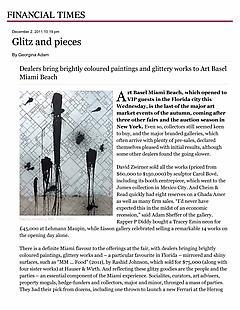 Glitz and Pieces
By Georgina Adam

Art Basel Miami Beach, which opened to VIP guests in the Florida city this Wednesday, is the last of the major art market events of the autumn, coming after three other fairs and the auction season in New York. Even so, collectors still seemed keen to buy, and the major branded galleries, which often arrive with plenty of pre-sales, declared themselves pleased with initial results, although some other dealers found the going slower.

David Zwirner sold all the works (priced from $60,000 to $150,000) by sculptor Carol Bové, including its booth centrepiece, which went to the Jumex collection in Mexico City. And Cheim & Read quickly had eight reserves on a Ghada Amer as well as many firm sales. “I’d never have expected this in the midst of an economic recession,” said Adam Sheffer of the gallery. Rapper P Diddy bought a Tracey Emin neon for £45,000 at Lehmann Maupin, while Lisson gallery celebrated selling a remarkable 14 works on the opening day alone.

There is a definite Miami flavour to the offerings at the fair, with dealers bringing brightly coloured paintings, glittery works and – a particular favourite in Florida – mirrored and shiny surfaces, such as “MM ... Food” (2011), by Rashid Johnson, which sold for $75,000 (along with four sister works) at Hauser & Wirth. And reflecting these glitzy goodies are the people and the parties – an essential component of the Miami experience. Socialites, curators, art advisers, property moguls, hedge-funders and collectors, major and minor, thronged a mass of parties. They had their pick from dozens, including one thrown to launch a new Ferrari at the Herzog and de Meuron-designed Garage (guests were issued scarlet scarves to ward off the sea breezes in the open space) and White Cube’s epic bash at Soho House, with stone crab, roast boar and lamb, along with tequila cocktails and vats of risotto.