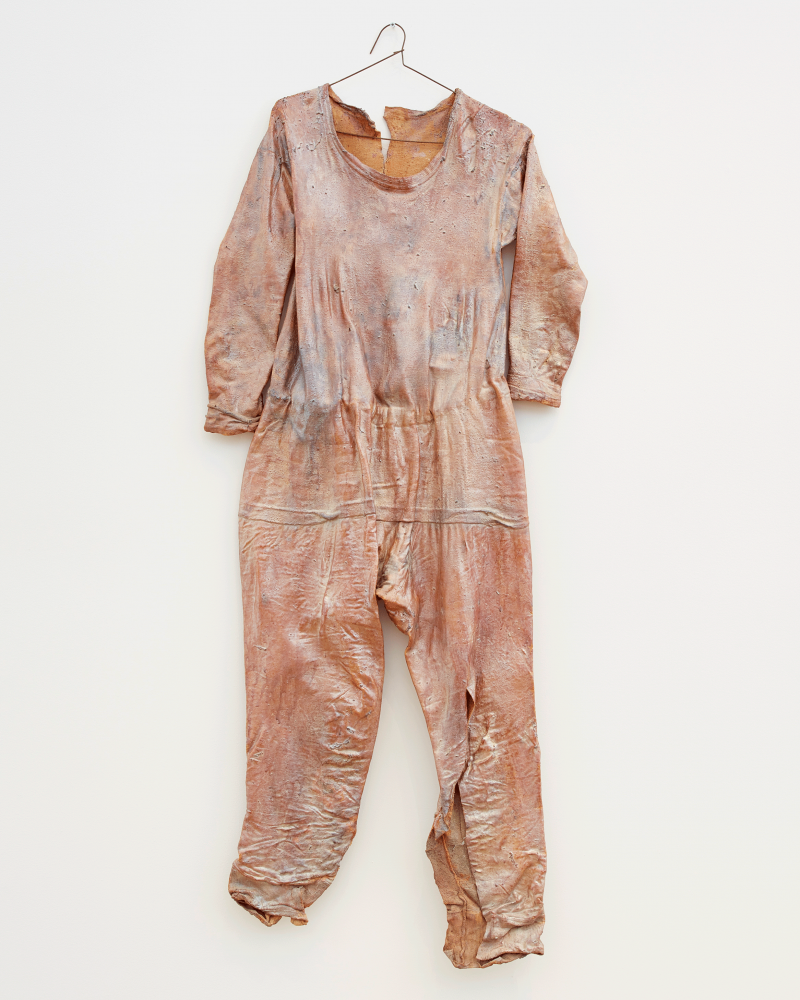 “We, all women, have quite a primeval relationship to textiles,” said the Swiss artist Heidi Bucher (1926–1993) in an interview from 1975. She draws a connection between fabric as women’s labor (“We’ve made it all ourselves”) and as capital (“the [bridal] trousseau and all that”), a frank reference to women as chattel passed from father to husband. At the time of the interview, Bucher was navigating a radical shift in her creative practice and personal life. Following her divorce in the early 1970s from the artist Carl Bucher, who collaborated with her on various fashion and art projects, she left the California home they once shared and moved back to Switzerland. There, she started using latex as a sculptural material to cover items of clothing, noticing that the rubbery substance would subtly darken from white to mottled shades of pink and beige. In 1976, she embarked on her breakthrough series of architectural Hauträume, or “skinnings” which she made by laying a gauzy layer of fabric over an interior—domestic, institutional, industrial—and painting it with a combination of latex and mother-of-pearl pigment. She would then peel away these synthetic hides for her installations.

The exhibition at Lehmann Maupin, “Heidi Bucher: The Site of Memory,” was a small survey of her production from this fortuitous moment. With her translucent, membranous castings, Bucher found a unique idiom to express family trauma, Europe’s genocidal past, and the continued subordination of women. For an early effort, she cast a section of the entrance to her Zurich studio—a former butcher’s freezer that she called the Borg—in latex. This show included both a framed cast fragment of her studio door and the imposing Borg, both 1976. The latex mold of the atelier’s threshold was the only freestanding sculpture on view. Borg is at once fragile and claustrophobic—it makes you feel as though you’re trapped inside the mouth of a giant who’s about to swallow you whole, or as though you are a tiny particle stuck beneath an insect’s crinkled wings.

Over the next few years, Bucher meticulously created moldings of her family’s homes. In her parents’ turn-of-the-century residence in Winterthur, she gravitated toward the wood-paneled herrenzimmer, or study, which was adjacent to her father’s gun collection. Tacked to the gallery wall, Untitled (Door to the Herrenzimmer), 1978, featured telling details, including delicate reliefs of a fish and a dragonfly. These creatures pushed Bucher to incorporate the idea of molting or shedding as a rite of passage into her personal mythology; her signature mother-of-pearl was inspired by their sheen.

Though not credited as artworks in themselves, a series of captivating process films revealed her work’s playful and performative qualities. They are all the more notable because Bucher was nearly fifty when she began her “skinnings”—older than the contemporaries, such as Eva Hesse, Rebecca Horn, and Gordon Matta-Clark, to whom she’s been compared. The earliest film recorded Bucher’s lighthearted Bodyshells performance on California’s Venice Beach in 1972. Here, she and her family (former husband included) inhabit futuristic foam sculptures that are part Michelin Man, part Star Wars character. A longer film by Martin Kugler from 1982 documented the molding of her grandparents’ house in Winterthur. In it, she orchestrates the “flight” of a sculpture that sails over the property, as well as a celebratory procession of skins through the streets. In 1990, the German television station SWR followed Bucher as she created molds of the Sanatorium Bellevue in Kreuzlingen, Switzerland—notorious for housing such patients as the actor Gustaf Gründgens, the ballet dancer Vaslav Nijinsky, and Freud’s hysteric Anna O. We see the artist roam the hospital’s glass-paned halls, which are draped in her long, phantasmal peelings. In the next scene, she hangs up the still-white skins made from one of the clinic’s rooms. The tableau is lit by candlelight as Bucher recites a sort of incantation near a cast of a Bellevue window that sits yellowed and mute, a ghostly reminder of the spaces that purported to offer healing.