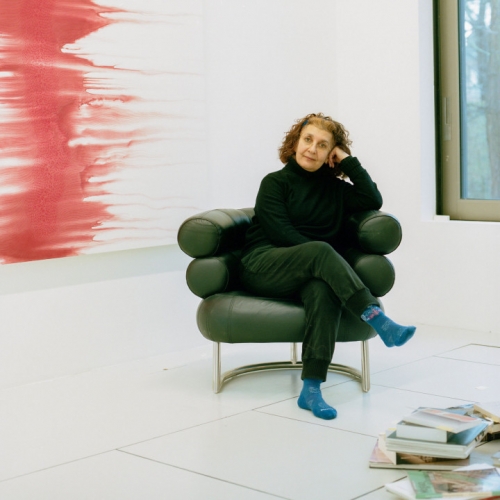 The secluded London studio of Shirazeh Houshiary foxes my Uber driver entirely. But I shouldn’t be surprised that the Iranian-born artist is off-grid. Among a heap of volumes that litter her studio floor is Reality is Not What it Seems by Carlo Rovelli, the quantum physicist whose luminous texts explain why Newtonian laws of space and time can only take us so far.

With her bright, bespectacled eyes framed by a halo of auburn curls, Houshiary emits her own radiance. After a flurry of mutual sorries — me for lateness, her for elusiveness — we plunge into a three-hour discussion of remarkable intensity. Yet even as we peregrinate through art, science, philosophy and politics with detours through Rovelli, Shakespeare, Derrida, Chaim Soutine and cave painting, Houshiary’s innate sweetness remains undimmed.

“I’m going to make you something called Happy tea,” she exclaims once we have settled in her large, white-walled studio. She returns bearing not only the beverage but also a box of strikingly luxurious vegan chocolates, then describes herself as a “vegetarian who sometimes eats fish”.

In truth, her real appetite is for ideas. “My desire is to bring the laws of nature, the laws of physics, into my work, because I feel it can’t be just me. It’s not enough; I need something else,” she says, gesturing at a painting on the wall. Entitled “Blurring”, from a distance it looks like a gauzy lapiz-hued chimera emanating out of a black void. But on closer scrutiny, the smoky apparition resolves into delicate strands of blue pigment that entwine and separate as if spelling out an indecipherable code.

“Blurring” is one of four new paintings and two sculptures she has made for her solo presentation at the stand of Lehmann Maupin at Frieze LA this week. It is the first time she has made work expressly for an art fair. Such a commercial destination seems at cross purposes with her ethereal character. “I am fed up with art fairs. They are so ubiquitous,” she admits, echoing the sentiments of many contemporary artists.

But the monograph presentation, which was suggested by Lehmann Maupin, suits her better than having “one sculpture or painting in a fair so that people only get a taste” of her work. With no restriction on theme or style, her show will allow people to experience the “whole vocabulary” of her work. “It’s only for three days but that’s not much different from theatre or dance,” she muses, suggesting that the pop-up nature of a fair gives the art a performative quality.

One hopes visitors pause long enough to give paintings such as “Blurring” serious contemplation. It was created using her signature method of pouring mineral pigment mixed with water on to canvas before “working” the pigment into patterns of her own devising, first in pencil and then with silk, cotton wool and brushes.

In keeping with others in the same series, “Blurring” hides a clandestine inscription of two words in Arabic. “One says ‘I am’ and the other says ‘I am not’,” Houshiary reveals.

“Only the laws of mathematics can explain it,” she admits when I ask her if she can elucidate why she has chosen the two opposing statements. “Think of one as ‘I am being’ and minus one as ‘I am not being’. What links them? Zero. Only zero has the potentiality of being both so this painting is trying to capture the energy of zero.”

It comes as little surprise to hear that Houshiary seriously considered becoming a mathematician. “Numbers are beautiful to me,” she says. “They come to me very easily.”

Ultimately she chose art over science because “it contained everything. It was not specialised. I didn’t just want to live in the mind as mathematicians do.”

Although her father — “an architect and musician” — hoped she would become a scientist, he fostered her capacity for independent choices. Touchingly, she credits him with “whatever I have”, adding that he taught her “to look, to understand, to not judge and not have preconceived ideas. To not believe what anyone tells me.”

Unable to connect with the radical ideas of revolution swirling through 1970s Iran — she grew up first in Shiraz then in Tehran — Houshiary moved to London in 1974 and enrolled at the Chelsea School of Art. By 1982, she had joined Lisson Gallery, whose practitioners commanded the radical heights of the contemporary art world. Ostensibly she was part of a new generation of British sculptors such as Anish Kapoor, Richard Deacon and Tony Cragg, yet Houshiary always felt an outsider.

“I was too many wrong things,” she says with a dry laugh. But as she describes the experience of being a woman from the eastern hemisphere in what was, save for Kapoor, essentially a western “boys’ club”, it’s clear that for all her success, those early decades were lonely.

Today, her curriculum boasts a galaxy of solo shows at Lisson, Lehmann Maupin and others, plus numerous participations in international events including the Venice and São Paulo Biennales, while her work is in major collections such as Tate, MoMA and the Guggenheim. In 1994, she was shortlisted for the Turner Prize when it was won by Antony Gormley.

Most importantly, she has achieved inner serenity. “I wanted to be part of something. I wanted affirmation,” she says of her younger self. “Now I’ve transcended that. It doesn’t matter to me.”

Her quest for self-acceptance dovetails with the journey of her practice. “In my thirties, I began to be very disappointed with something. Maybe the art world was not what I though it was,” she recalls. “I sat in my studio trying to understand who we were and who were not.”

That exploration led her to the concept of “the fold”, which is fundamental to her art. She explains it as “a hinge or space” that acts as “the gap where reality is. Where you exist and don’t exist.”

Serendipitously, we have journeyed back to one of the sculptures that will also grace Lehmann Maupin’s LA booth.

Entitled “Lunate”, it is made from small glass bricks cast on Murano in a translucent caramel hue that fluctuates constantly in the light. Laid one on top of another by Spanish studio Factum Arte — whose digital knowhow has made it the first port of call for many contemporary artists — the glass nuggets defy their material hardness to fold around their centre in a spiralling motion. When I peer within, the sense of spin and light evokes the cosmic suck of a star plunging into a black hole or the double helix of DNA.

For Houshiary, the sculptures encapsulate her realisation that “we are never sitting still. Everything is constantly shifting and moving, like being on the waves of the sea. That’s one of the ideas we get from Carlo Rovelli — the concept of waves. My work deals with that fluidity, that intangible space.”