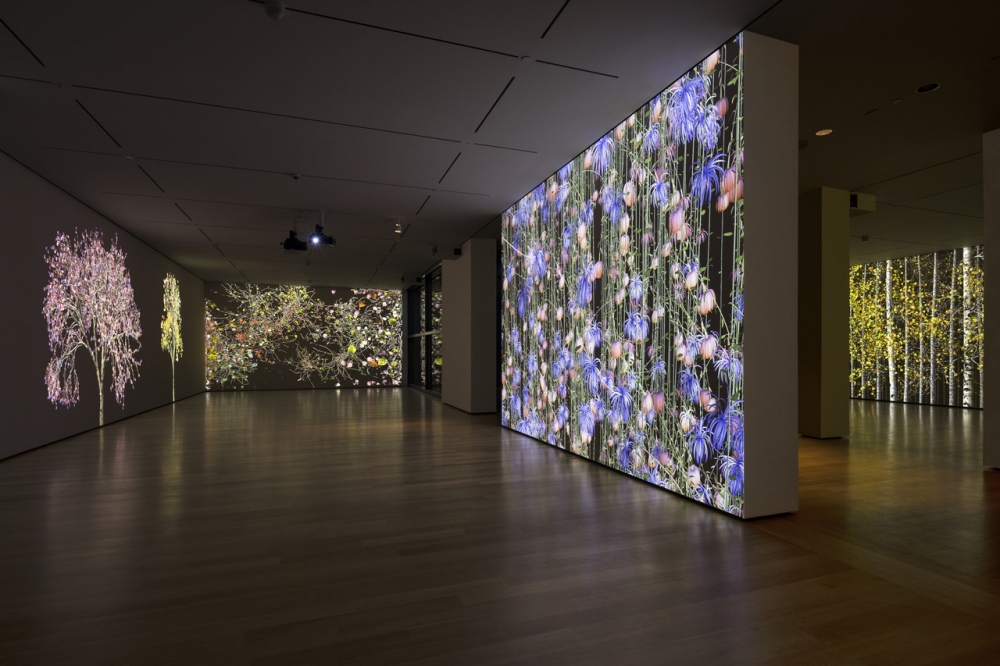 The artist’s haunting, computer-generated projections in the Clark Art Institute’s exhibition offer an overview of her dominant, wide-ranging concerns.

About a dozen years ago, I unexpectedly encountered one of Jennifer Steinkamp’s mysterious, mutable, computer-generated works, a cascade of swaying, frankly fake blossoms on delicate vines, newly installed by the entrance of an elegant restaurant near where I live. (Ever since, it has made waiting for a table a pleasure.) Titled “Rapunzel,” the moving projected tangle was at once beautiful and vaguely discomfiting; alluring because of its constant, unpredictable movement and color shifts, but also puzzling. The title triggered associations with the tales of the Brothers Grimm, which terrified me as a child, adding to the ambiguity. I’d seen other Steinkamps before, mainly trees responding to the passing seasons, but “Rapunzel” seemed especially surprising and enigmatic.

I followed Ms. Steinkamp’s work when I could. Then, in 2012, we met as participants in a College Art Association panel about modern color, where I was impressed by her lucid presentation. We said something about staying in touch, yet never did. So I was delighted to learn about “Jennifer Steinkamp: Blind Eye,” now on view in the Tadao Ando designed Lunder Center at Stone Hill at the Clark Art Institute. The exhibition includes five generously sized to downright enormous works made between 2005 and 2018, from an expanded version of “Rapunzel” to the brand new “Blind Eye, 1.” Together, the five projections provide an informative overview of some of Ms. Steinkamp’s dominant, wide-ranging concerns.

Nothing, however, is quite what it seems. As is often typical of Ms. Steinkamp, all the works at the Lunder Center derive from nature, but their imagery and colors, while seemingly photo-based, at first acquaintance, quickly announce that they are invented, computer-generated and manipulated; more important, these mesmerizing, mobile phenomena soon make it plain that they are not intended as naturalistic, digital-age equivalents of things seen, but rather as metaphors for everything from attitudes toward women to the migrant crisis.

“Rapunzel, 5” (2005), the earliest work on view, fills a 12-by-18-foot wall with shaggy pink and purple blossoms in various stages of development. Hanging downward on fragile stems, they describe slow arabesques against a curtain of vertical stalks punctuated with occasional leaves. The story of the princess imprisoned in the tower and the prince who climbed her golden tresses is familiar, so, prompted by the title, we equate the swaying tendrils with dangling locks. But the excellent catalog of “Blind Eye” recounts the more lurid first edition of the tale, which connects the sinuously moving flowers with a plant that is craved by Rapunzel’s pregnant mother with disastrous consequences. Somehow, Ms. Steinkamp encapsulates the disturbing undercurrents of the Brothers Grimm’s tale of subservience and vengeance, transforming “Rapunzel, 5” from (admittedly magical) high-tech wallpaper into something compelling and scary.

Similarly, the two trees in “Fly to Mars, 6” (2006) and “Fly to Mars, 9” (2009) provoke thoughts about mortality, as well as seasons. It has something to do with the isolation of the images against infinite blackness and with the way Ms. Steinkamp slows time. The trees toggle from leafy green to sparse red and back again, abruptly, but at intervals so widely spaced that we often miss the transitions; fail to pay attention and everything changes. As with other works, such as “Rapunzel, 5” or “Premature, 6” (2010), the show’s sole abstraction, we look for systems and repetitions, but usually fail to find them, which makes us look harder.

“Diaspore, 2” (2014) confronts us with more than 21 feet of knotted branches, trapping random leaves and seeds. Here, the repetition is clear, suggesting an unbreakable cycle. The gatherings blow across the projection, bouncing against the edges, loosening and clenching. Leaves swirl, spread, coagulate, then spread again. The title suggests how airborne seeds and spores are disseminated, yet the windblown leaves and restless branches also become potent evocations of the perils of migration today, as thousands flee political unrest and natural disasters across hostile territory.

“Blind Eye, 1” (2018), commissioned by the Clark, spreads a 43-foot-wide row of life-size pale birch trunks against a dark ground, tops and bases cropped to confront and dislocate us. The varied trunk sizes imply deep space, but also read as a fence-like barrier. Leaves sprout from a welter of small branches, forming a dense screen, then turn yellow and drop. Tiny new leaves appear, like stars against the darkness. Seen against the woods visible through the gallery window, the accuracy of Ms. Steinkamp’s perceptions is obvious, but so is the artifice of her seeming naturalism. The black markings on the trunks become stylized eyes and the once-benign forest becomes threatening. Despite the arresting beauty and provocative use of motion in her work, there’s also a sense of the sinister. We’re back with the Brothers Grimm, in uncanny territory where danger lurks. Once again, Ms. Steinkamp has proved herself one of the rare video artists particularly adept at finding poetry in the specifics of her medium. Nothing is what it seems.