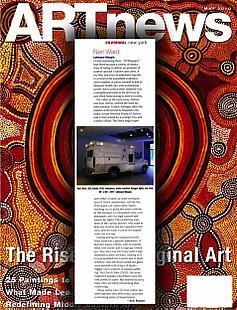 In this convincing show, "LIVESUpport," Nari Ward accused a variety of institutions of failing to deliver on promises of comfort and aid. Crutches and canes, X-ray film, and even an ambulance figured in several of the assembled sculptures. And a number of pieces seemed to link inadequate health care with institutional racism. But to some extent, medicine was a metaphorical stand-in for all forms of care Ward finds lacking in modern society.

The video in the back room, Fathers and Sons (2010), offered the most layered scenario. A black teenager takes the podium at Reverend Al Sharpton's National Action Network House of Justice, and is then joined by a younger boy and a police officer. The three might represent either a family or some configuration of victim, perpetrator, and the law. Then quick-cut videos show hands reaching out to grasp the police uniform as the teenage, in a distorted voice-over, alternately asks for legal counsel and waives his rights. The conflicting emotions of the various players, who want to help one another but are trapped in their roles, and the futile cycle of the looped video are moving.

Central among the sculptures in the front room was a ghostly ambulance, titled Sick Smoke (2010), with its interior filled with smoke and its signage whited out. Also here was the Chase bank's logo rendered in black on black, looking as if it were branded into a landscape to mark territory. And roll-down metal riot gates were painted with X-rays of skulls – tagged with evidence of human suffering. For Church State (2010), the artist fashioned pseudo wheelchairs from the end panels of a pew. But marred by rusty nails, they are more threatening than comforting.

These works were far from subtle, but seen together they effectively conveyed a mounting sense of hopelessness.