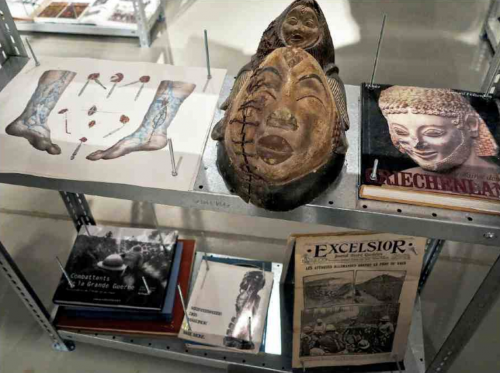 Fifteen years ago, while living in Congo, Kader Attia was given a piece of Kuba raffia cloth to which patches of Vichy fabric had been applied in order to mend a tear. Struck by the poignancy of this artifact, the French-Algerian artist initiated a decade-long research on the ontological status of repaired objects. Repair, as a cultural practice, threatens the totalizing unity of the cultural icon, whilst allowing the people living in the periphery of the Western Empires to appropriate the symbols of the colonizing powers into their own cultural idioms. The project's first iteration, The Repair, shown at the dOCUMENTA(13), was an essay in comparative aesthetics written from the vantage point of the wretched of the West. The disfigured faces of World War I soldiers were juxtaposed with broken fetishes, fractured African masks, stitched-up pieces of loincloths. Staging a dialectics of destruction and healing, the project described a narrative arc, from the empirical notion of repair to the realm of "reparation" as in the restitution of a previously inflicted loss. For his new exhibition Repair. 5 Acts- which will open on May 25'" at the KW Institute for Contemporary Art in Berlin- Kader Attia will continue to expand on a notion he aptly came to describe as a fractal, or a mise en abyme of representation policies.

Ana Teixeira Pinto: When I saw your installation The Repair at the dOCUMENTA(l3) I couldn't help think about the term "No Man's Land" originally used to designate the area of land between two enemy trench systems, which neither side could claim as its own. I was wondering whether you are hinting at a connection between the space of absolute death from which the soldier’s disfigured faces emerge and the probable origin of your other objects, the repaired objects, also likely emerging from the trauma of slave trading, colonial wars, population displacement . . .

Kader Attia: The "No Man's Land" is an interesting association because it speaks of a hybrid condition, and in-between-ness. When you see a cross representing Jesus, for instance, made of rifles and bullets, you encounter this kind of Otherness. Another example would be this fetish I found, from the Congo, made with a cognac bottle and a series of locks in which just the head is a wooden representation of a protective divinity of the village. What you encounter here is not only an Otherness in between but also within these items. That is why I like the notion of mise en abyme. Hybridity is not a mixture of two identities, it's rather a fractal, composed of millions of hybrid elements, each of which is itself composed of other hybrid elements . . .

ATP: You mentioned that at some point you became aware that these objects-the repaired objects-were nowhere visible inside the Western Museum; that in most ethnographic collections they were often found inside a box tucked away in a dusty basement ...

KA: Yes, these objects, once they were brought to the West, never found their way out of the storage room. There are some notable exceptions, like the exhibitions of broken items held in the early 2000s, like Le Musée du Quai Branly's Objets blessés, but these examples are extremely rare and they all focus on the aesthetics of repair-for instance you have a broken Calebasse mask, and its repair looks very similar to a scar. This aesthetic is certainly interesting, but it is just one aspect of repair, and it fails to take into account the extremes from which these items emerge. In the traditional villages of either Africa or Latin America, repairing a broken item meant just to fix it, regardless of how the object would come to look thereafter.

When I say "repair," on the other hand I mean something akin to the story of this object I came across, a fetish that originally had two eyes made of small cowries, African shells. Some 70 years ago one of these shells disappeared, and the fetish, now missing one eye, was repaired with a French button. Later this item arrived in the collection of the National Museum of African Art in Washington DC, where it remained in storage during the whole 20th century. I discovered this item in their storeroom, and eventually I discovered thousands of such items with unexpected repairs, including Western items, like a cloth from the Congo with its holes repaired with a piece of Vichy fabric. At the Smithsonian in Washington I found an item in which a missing eye had been replaced with a dollar coin-here we are very close to Oswald de Andrade's concept of cultural anthropophagy, and his idea that to swallow the symbol of foreign rule is an attempt to control it. Thus repair is not only a passive act, but a sort of re-appropriation of the self. The witchdoctor and sculptor who did this was expressing the group, the community through an expression of the self, which you can analyze from the perspective of both psychoanalysis and animism.

ATP: Besides being an attempt to regain some control over forces that oppress them, could we not say that these items bear witness to how identity always emerges out of an encounter, I mean, how identity is never a question of truth, but of social being, power, authority, patriarchal order, et cetera. And the work of repairing is also gender-coded ...

KA: Yes. World War I is a very emblematic moment for my research, because it's a pivotal point, in which you have all these millions of items coming from Africa entering European museums-not merely entering Curiosity Cabinets, but also public museums-co-occurring with the beginnings of Social Science and of Feminism. It's important to note how this unfolds. On the battlefield, most doctors were so overwhelmed that they needed any help they could get, and who helped them? The nurses. "Do you know how to cut and sew? Ok, stitch up this man's face." The broken-faced soldiers were mostly stitched by young nurses. I've been working on one particular subject, a French woman whose name was Noelle. After the war-and whilst women were enjoying their first social acknowledgment- Noelle opened the first plastic surgery cabinet in Paris, where she adapted and put to use everything she had learned in the trenches, in order to transform women, their breasts, their faces. So we could say that women (in this case nurses) used the heroic status they had achieved by repairing soldier's faces to repair their unequal social position in male-dominated society. That is why I say that repair is not just a cultural, political or natural issue, but has to be seen as a multifaceted geometric concept.

ATP: At some point the project makes a leap from the more empirical notion of "repair" to the more politically charged concept of "reparation" . ..

KA: The two concepts-reappropriation and repair-are intimately linked. For instance, the body-altering practices of extra-Occidental cultures, since 50,000 years ago, are both a form of reappropriation and of repair, though for a modern Western mind they look like acts of mutilation. These body transformations aim at signaling social cohesion, showing that the subject belongs to a group of other subjects. So these transformations aim at repairing some missing.