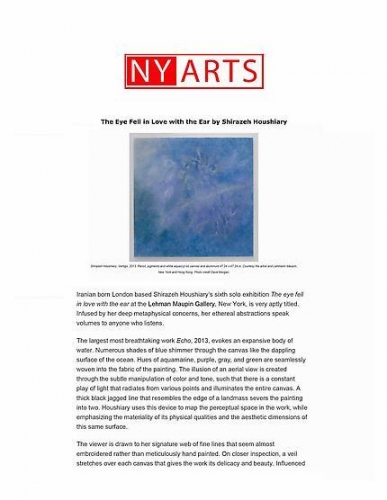 Shirazeh Houshiary: The Eye Fell in Love with the Ear
By Bansie Vasvani


Iranian born London based Shirazeh Houshiary’s sixth solo exhibition The eye fell in love with the ear at the Lehman Maupin Gallery, New York, is very aptly titled. Infused by her deep metaphysical concerns, her ethereal abstractions speak volumes to anyone who listens.


The largest most breathtaking work Echo, 2013, evokes an expansive body of water. Numerous shades of blue shimmer through the canvas like the dappling surface of the ocean. Hues of aquamarine, purple, gray, and green are seamlessly woven into the fabric of the painting. The illusion of an aerial view is created through the subtle manipulation of color and tone, such that there is a constant play of light that radiates from various points and illuminates the entire canvas. A thick black jagged line that resembles the edge of a landmass severs the painting into two. Houshiary uses this device to map the perceptual space in the work, while emphasizing the materiality of its physical qualities and the aesthetic dimensions of this same surface.


The viewer is drawn to her signature web of fine lines that seem almost embroidered rather than meticulously hand painted. On closer inspection, a veil stretches over each canvas that gives the work its delicacy and beauty. Influenced by Islamic architecture and its interlacing patterns, Houshiary’s all over filigree-like design serves a deeper transcendental purpose. The translucent gossamer both obscures and directs the viewers’ eyes towards a deeper metaphysical space. One is induced into a meditative trance by the prismatic effect of the colors and the intricate decorative element. These qualities seem to highlight the recurring presence of the infinity of time and space in her works.


In Ode, 2013, and Vertigo, 2013, also constructed in a similar vein with alluring veils and birds-eye-perspectives, Houshiary shapes the mood of her paintings through her choice of colors.  Varied saturations of purple give Ode a more somber feel, while a lighter palette of sky blues and violets provide Vertigo with an ethereal tonality.  Much like Mark Rothko’s abstractions, Houshiary’s use of color fields and flat surfaces make the paintings vibrate with emotional depth and create contemplative moments.


Her video installation titled Dust, 2011-13, is made up of burning candles that form a grid against a backdrop of ivory travertine. Wafts of soot become amorphous fragile clouds before they disappear and reappear to take new shapes and patterns. The slow, almost imperceptible movement of veils of soot against the pale limestone reveals the gradual transience of time, and the yin and yang of opposites—black fleeting soot against the permanence of solid white stone. The accompanying soundtrack of a violin combined with the hypnotic incantation of a chant mesmerizes the viewer.  Houshiary demonstrates her ease with various mediums as she deftly combines different artistic traditions.


The sculptures in the gallery made from bright, anodized aluminum bricks differ from the paintings in their sturdy sinuous forms and muscular armature. A sense of rhythm and movement emanates from the curvatures and the arrangement of varied shades of bricks. Although less appealing than their two-dimensional counterparts, these large works complement the paintings in the gallery.


At the end, Houshiary succeeds in making the viewer believe that if art is to remain an important entity it has to go beyond daily existence.  It must rise above culture and creed in order to resonate with the human soul.