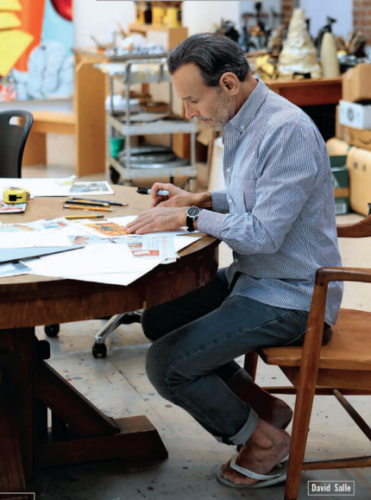 Eighties art star David Salle was one of the top talents who deﬁ ned possibly the most thrilling, unfettered time in modern art history. Following his meteoric rise during that decade of grit and glam, Salle continued on, unscathed, to forge a remarkable half-century painting career that has intersected performing arts, ﬁlmmaking, photography (provocatively tilted to a Shades of Grey sensibility) and even, surprisingly, ceramics. His epic upcoming show at the Dallas Contemporary — on view April 11 through August 23 — headlines Dallas Arts Week and marks the ﬁrst time in a quarter century that Texas audiences will see Salle in solo since his 1988 exhibition at The Menil Collection. Via email, Catherine D. Anspon queried the king of decades of biennials about the best advice he got from Baldessari, his ﬁrst big break, past and future ties to Texas and why he paints like he paints. The answer, it seems, is all about the movies.

HOW DID THE DALLAS CONTEMPORARY SHOW COME ABOUT? DID RICHARD PHILLIPS, WITH WHOM YOU CO-CURATED THE 2010 HAUNCH OF VENISON EXHIBITION ABOUT THE ‘80S, INTRODUCE YOU?

It was very direct. [Dallas Contemporary executive director] Peter [Doroshenko] came to the studio and asked if I might like to have a show in Dallas. Would that everything in life were so simple … If Richard Phillips played a part, it was off-screen, so to speak. I was very pleased to learn of Richard’s involvement with the Contemporary — but that came later.

ON YOUR RELATIONSHIP TO TEXAS.

Until recently, I knew only a handful of people in Texas. The primary connection was my long-time friendship with Walter Hopps, the legendary Menil curator, and also with Fredericka Hunter of Texas Gallery, with whom I share an interest in the performing arts. I did two shows with Walter and spent untold hours talking to him about everything from Beat poetry to Civil War history. But after Walter died, years went by when I didn’t make it down. But in the past year or so, my connections to Texas seem to be expanding rapidly. I’ve started working with Richard Newlin at Houston Fine Art Press — he’s the Stradivarius of lithography — and we’re close to completing a very ambitious project which is related to the paintings that are going to be shown in Dallas. In addition to being a master of the color spectrum, Richard is a keen observer of the contemporary scene, as well as a living link to some protean artists of the past. I’ve also become friendly with Toby Kamps at the Menil, an extremely bright guy; we have a nice dialogue going. Also, this past year I was asked to make six very tall paintings, a single ﬁgure each on the theme of Greek gods and goddesses, for the rotunda of a building being developed in Dallas. It’s  a lovely tall skylit space. That was a kick. I’ve even become a [Texas] property owner. My wife and I fell in love with Marfa and bought a little piece of land there we’ll eventually build [upon]. We try to get to Marfa whenever we have a break in the schedule. I guess you could say I went from having a rather tenuous connection to the state to being an almost part-time resident.

ABOUT THE WORK FOR THE DALLAS CONTEMPORARY.

Peter and I decided to focus on a group of pictures from the last three or four years that connects to my earliest idea of the painting I wanted to make, one built around the juxtaposition of wildly dissimilar parts. It sounds a little didactic to describe it like that. It’s more of an intuitive response — just my perceptual antennae at work. Some of the paintings have not been shown before. We’re calling it “Debris,” which refers to some of the imagery and is also just a nice word; it kind of ripples outward when you say it. In addition, we’re including some of my ceramics as stand-alone objects. It’s as if the clay vessels, which all along I made as components to use in the paintings, took on an autonomous life of their own. That will be a ﬁrst.

ON BECOMING AN ARTIST: SEMINAL EXPERIENCE GROWING UP IN WICHITA THAT LED TO YOUR BECOMING A PAINTER.

I had two very lucky breaks growing up. The ﬁrst, as a kid in Kansas, was to meet Bill and Betty Dickerson, both ﬁgures in the Regional Art movement of the last century. They were the real deal, a direct link to Edward Hopper on the one hand, and the Taos School on the other. They ran a kind of singular art school. I met them when I was 9, and that changed everything for me. The second act of providence was to ﬁnd my way to CalArts in 1970, where I met John Baldessari. I had never even been on an airplane before going to L.A.

ON THE WEST COAST AND EARLY DAYS IN MANHATTAN: HOW DID YOU DECIDE TO ENTER CALARTS? YOUR BEST BALDESSARI ANECDOTE FROM WHEN HE WAS YOUR TEACHER?

It was a ﬂuke, really. I’m not even sure how I knew about it, as [CalArts] hadn’t yet opened. As I said, providential. John [Baldessari] taught by example; he showed that art came out of the whole person. He was patient, and he was wise. When I ﬁnished school, John said, “Go to New York,” and so I did. The downtown NY scene of the ’70s had more in common with the London of Charles Dickens than with the Chelsea art world of today. It was scrappy, as you say, in the extreme. When I arrived, the city itself was on the verge of bankruptcy. The art world was suffering from a severe contraction, and I was deliriously happy to be there.

FROM WHERE DID YOU DEVELOP YOUR WAY OF PAINTING WITH ITS SPLIT SCREENS, POP-UP WINDOWS, CLOSE-UPS AND WIDE PANS? IS THE VIEWER MEANT TO CREATE THEIR OWN NARRATIVE? ALSO, MANY CURRENT CANVASES SEEM TO QUOTE OR COMMENT UPON ELEMENTS OF ABSTRACTION. ARE YOU MIRRORING THE PLURALITY OF CONTEMPORARY PAINTING?

My way of building a picture evolved naturally from who I am and how I see things. I don’t put much store by intentionality; it was not so much a conscious decision as it was a predilection, what I wanted to see. I’m drawn to simultaneity and things operating in counterpoint, stories inside of other stories. It’s how I experience the world. Of course, the viewer may construct some narrative out of it all — or not. But what people mean by narrative is often something outside the painting, when the real narrative in internal. Painting, in fact, is always a plurality; everything that ever happened is still going on somewhere. And abstraction — that is, the pure language of painting — has always been part of my work.

IS YOUR SIGNATURE CONSTRUCT AND ORGANIZATION OF THE CANVAS GLEANED FROM CINEMA? WHICH THREE FILMS AND DIRECTORS ARE ON YOUR VERY TOP LIST OF ALL TIME?

Movies got under my skin at a very early age, and it’s possible that cinematic language — really, the language of framing and editing  — shows up in my work in a compositional way. In some paintings more than others. There are so many great directors in the history of movies — how can you narrow it down to three? But I can tell you that I’ve probably watched Bergman’s Persona more than any other ﬁlm, at least 20 times.