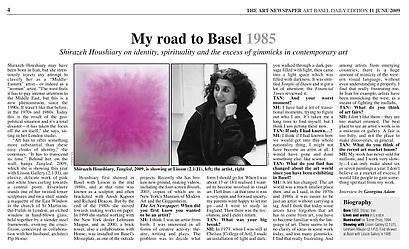 My Road to Basel 1985
Shirazeh Houshiary on identity, spirituality and the excess of gimmicks in
contemporary art

Shirazeh Houshiary may have been born in Iran, but she strenuously rejects any attempt to classify her as a "Middle-Eastern" artist—or indeed as a "woman" artist. "The west feels it has to pay intense attention to the Middle East, but this is a new phenomenon, since the 1990s. It wasn't like that before, in the 1970s and 1980s. Today this is the result of the geopolitical situation and it's a total disaster—it has taken the focus off the art itself," she says, sitting in her London studio.

"Art has to offer something more substantial than these easy cloaks of identity," she continues. "It has to transcend its time." Behind her, on the wall, hangs Tangled, 2009, which she is showing this year with Lisson Gallery (2.1/J1), an elusive, delicate work of pink and white lines curling towards a central point. Elsewhere stands one of her twisted tower sculptures and on a shelf stands a maquette of the East Window in the church of St Martin-in-the-Fields in London, an etched window in hand-blown glass, held together by a slender steel framework, evoking the crucifixion, conceived in collaboration with her husband, architect Pip Horne.

Houshiary first showed in Basel with Lisson in the mid 1980s, and at that time was known as a sculptor, and often bracketed with Anish Kapoor and Richard Deacon But by the end of the 1980s she moved towards making works on paper. In 1999 she started working with the New York dealer Lehmann Maupin, and in 2000, a brick tower, also a collaboration with Horne, was installed on Basel's Messeplatz, as one of the outside projects. Recently she has broken new ground, making videos, including the four-screen Breath, 2003, copies of which are in New York's Museum of Modern Art and the Guggenheim.

The Art Newspaper: When did you first know you wanted to be an artist?

SH: I think I was an artist from birth. I was interested in all forms of creative activity: theatre, writing and plays. The problem was to decide what form I should go for. When I was about 17 or 18 I realised I wanted to become involved in visual art. I left Iran—at that time it was a very open and forward society, my parents were happy to let me go—and I went to study in England. Then there was the revolution, and I didn't return.

TAN: What was your big break?

SH: In 1979, when I was still at Chelsea [College of Art], I made an installation of light and dark: you walked through a dark passage filled with light, then came into a light space which was filled with darkness. It was entitled Temple of Dawn and it got a lot of attention; the Financial Times reviewed it.

TAN: And your worst moment?

SH: I have had a lot of transitional moments, trying to figure out who I am. It's taken me a long time to find myself, but I think I am getting there now.

SH: I think if I had known how we would get into this whole nationality thing, I might not have become an artist at all. I would have gone and done something else, like science.

TAN: What do you find has changed about the art world since you have been exhibiting in Basel?

SH: A lot has changed. The art world was a much smaller place then, and as I said, in the 1970s and 1980s it was easier to be just an artist without carrying a tag. And I think that today some artists have forgotten that art has to come from art, you have to become familiar with the language of art. There seems to be no clarity of ideas in some work today, and too many gimmicks. I find that really frustrating. And among artists from emerging countries, there is a huge amount of mimicry of the western visual language, without even understanding it properly. I find that really frustrating too. In Iran for example, artists have been mimicking the west, as a means of fighting the mullahs.

TAN: What do you think of art fairs?

SH: I don't like them—they are too market oriented. The best place to see an artist's work is in a museum or gallery. A fair is too bitty, and not the place to make discoveries, in general.

TAN: What do you think of the recent art market boom?

SH: My work has never sold for millions, and I work very slowly— I can only make about six or seven paintings a year. I don't believe in a market of excess; I would like people to gain something spiritual from my work.