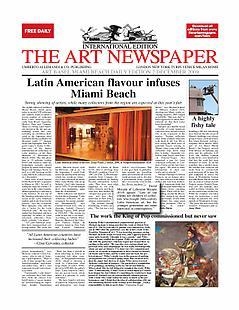 Latin American flavour infuses Miami Beach
Strong showing of artists, while many collectors from the region are expected at this year's fair

The eighth edition of Art Basel Miami Beach, which opens today to invited VIP collectors and curators, hopes to attract a record number of collectors from Latin America—especially from Brazil, Argentina, Mexico, Peru and Uruguay. There is a strong Latin American flavour to the fair and surrounding events this year, including an exhibition dedicated to the Argentine artist Guillermo Kuitca at Miami Art Museum (until 17 January 2010) and highlights from Eugenio López's Jumex Collection—one of the largest international art collections in Latin America—at the Bass Museum (3 December-14 March 2010). The fair plays host to 19 galleries hailing from Latin America, while the programme includes special projects by artists such as Jorge Mayet and Santiago Sierra, as well as a talk focusing on the Latin American collector scene on 5 December.

There were several reasons for the Basel brand's expansion to Miami in 2002. As well as setting the stage for a sunny US sister fair in the winter months, Miami opened up a vital link to Latin America. "It was one of the founding principles to have access to the Latin American market, and to develop it in the process," says fair co-director Marc Spiegler, who calls the city a "nexus for the Latin American elite". He says the market has flourished, and he is expecting an influx of Latin American collectors—"hundreds, certainly"—to attend.

"All Latin American countries have increased their collecting habits. The scene has grown tremendously," says Mexican collector César Cervantes, who is one of Saturday's panel speakers. "There is a lot of buzz around the Latin American market," adds dealer Alexander Gray (H27), who represents several Latin American artists.

Traditionally, Latin American collectors have had what New York art adviser Lisa Schiff terms a "soccer mentality" towards buying art. Argentines bought Argentinian artists, Mexican buyers went for Mexicans, and so on. "At the beginning, I could look across the auction room and see which lots would go where," says Latin American art dealer Mary-Anne Martin, who set up Sotheby's first Latin American sale in 1979. "Everyone bought their own nationality, apart from the Venezuelans."

Both collectors and dealers say that this is changing. "Latin American collectors are increasingly becoming committed internationally," says Chantal Crousel (G1), who is showing Gabriel Orozco's Raining Figures, 2009, priced at $500,000. "The reason we come to this fair is for them." According to Gabriel Pérez-Barreiro, director of the Colección Patricia Phelps de Cisneros based in New York and Caracas, Venezuela: "There has been a growth in local collecting, as well as an expansion into other countries." At Neugerriemschneider (E18), which is showing a work by Cuban-born artist Jorge Pardo (Untitled, 2009), priced at $250,000, the gallery adds: "Latin American collectors are real art lovers, which makes it a pleasure to work with them."

"We have found a real area of interest in American history and abstraction," says Adam Sheffer of Cheim & Read (E19), who is showing Joan Mitchell's painting Chord VI, 1987, for $3m. "Collectors particularly from Uruguay, Argentina and Brazil are looking beyond nationalistic boundaries. They have seen what happened to, for example, Hélio Oiticica, and they have seen how that market has developed and gone into museums, and now they are interested in New York 1950s abstract expressionists."

The reasons behind the broadening of tastes are complex. "The fair has a lot to do with it," says Cervantes. "But it also goes back to globalisation—people are travelling more and museums all over the world are more active. It is also a generational thing—people don't necessarily want to collect Rivera anymore." David Maupin of Lehmann Maupin (F19) agrees: "Lots of our clients are children of collectors who bought 20th-century Latin American art, but the younger generation are more interested in contemporary."

"Ten years ago, Latin American collectors came to us looking for works by Vik Muniz," says Michael Jenkins of Sikkema Jenkins (G4), showing two Muniz works including Anatomy, 2009, tagged at $40,000. "But now they've been exposed to so much international art that their tastes have diversified."

Spiegler says that the social networks of Latin American collectors have played a major role in the expansion of the market: "Serious collectors often bring younger collectors with them to the fair. We're now seeing the third wave of potential buyers coming to Miami—they come with older collectors who know what they're doing." Argentine collectors Juan Vergez and Patricia Pearson-Vergez, who organised a trip for Latin American collectors to London's Frieze art fair last October, agree: "We need to share information, to show our works and to educate."

Michael Plummer of Artvest Partners, an art finance advisory firm, believes in the future of the Latin American markets: "A lot of Americans think that some of the more interesting art will come from emerging economies. There will be people sniffing around the Brazilian artists, trying to get ahead of the next trends. I really think that country has some great long-term prospects. That is something to watch."