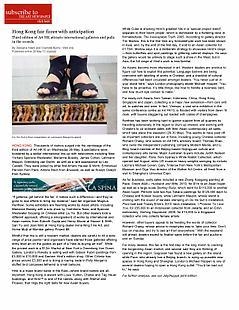 HONG KONG. Thousands of visitors surged into the vernissage of the third edition of Art HK10 on Wednesday 26 May. Expectations were bolstered by a stellar international line-up with newcomers including New Yorkers Sperone Westwater, Marianne Boesky, James Cohan, Lehmann Maupin, Greenberg van Doren, as well as a rare appearance by Leo Castelli. They were joined by other first-timers Hauser & Wirth, Emmanuel Perrotin from Paris, Almine Rech from Brussels, as well as Roslyn Oxley9 from Sydney.

"If galleries get behind the fair, it makes such a difference-and they've gone to real efforts to bring top material," said fair organiser Magnus Renfrew. Some exhibitors are flaunting works by Asian artists, including Marianne Boesky with a solo show by Yoshitomo Nara, and Sperone Westwater focusing on Chinese artist Liu Yeo But other dealers took a different approach, offering a smorgasbord of works by intemational and Asian names, from Subodh Gupta and Henry Moore at Hauser & Wirth, San Yu and Joan Miro at Hong Kong dealer Anna Ning Fine Art, and Huma Mulji at Mumbai gallery Project 88.

Mindful that this is still a nascent market, dealers are careful to hit a wide range of price points-and organisers have starred those galleries offering entry level art on the guides as part of a "new-to-buying art trail". While the priciest work is a $12m Warhol at New York's Greenberg Van Doren Gallery, London's Rokeby is selling well with Gideon Rubin paintings from £3,000 to £10,000 and Damien Hirst's edition shop, Other Criteria has prices around £3,000 and is doing a roaring trade in Polly Morgan's stuffed bird carcasses tethered to small balloons.

Hirst is a major brand name in the East-where brand names are all-important. Hong Kong is awash with Louis Vuitton, Chanel and Tag Heuer hoardings, and Hirst is one of the names, along with Warhol and Picasso, that rings the right bells for new Asian buyers.

White Cube is showing Hirst's greatest hits in a "special project stand", separate to their booth proper, which is dominated by a fluttering dove in formaldehyde, The Inescapable Truth, 2005. According to gallery director Tim Marlow, this is the first time any formaldehyde work has been shown in Asia, and, by the end of the first day, it sold to an Asian collector for £1.75m. Marlow says it is a deliberate strategy to showcase Hirst's range -from butterflies and spot paintings to glittering cabinet displays. He says the gallery would be unlikely to stage such a show in the West, but in Asia, the full range of Hirst's work is less familiar.

As Asians become more interested in art, Western dealers are anxious to figure out how to exploit this potential. Language barriers are being overcome with labelling of works in Chinese, and a checklist of cultural differences had been circulated amongst dealers. "You never just sit in your stand here: says London photography dealer Michael Hoppen. "You have to be proactive. It's little things, like how to handle a business card, and how much eye contact to make."

For newly-rich Asians from Taiwan, Indonesia, China, Hong Kong, Singapore and Japan, collecting is a major new sensation-from cars and art, to watches and wine. In fact, Vinexpo, a vast wine exhibition in the same conference centre as Art HK10, is flooded with visitors from dawn 'til dusk, with buyers staggering out loaded with crates of champagnes.

Renfrew has been working hard to garner support from all quarters by travelling extensively in the region to drum up interest, and working with Christie's to co-ordinate dates with their Asian contemporary art sales, which take place this weekend (29-30 May). This seems to have paid off as important collectors are out in force, including young Chinese collector Richard Chang, who serves on Art HK's advisory board, Thomas Shao, who owns the independent publishing company Modern Media, and Li Bing, board member of the Beijing-based Hejingyuan culture and contemporary arts centre. Major Australian buyers include Judith Neilson and her daughter, Paris, from Sydney's White Rabbit Collection, which opened last August, while US museum heavy-weights swinging by include Lacma's Michael Govan, Gary Tinterow from New York's Metropolitan Museum and Olga Viso director of the Walker Art Centre, all fresh from a visit to Shanghai's Universal Expo.

As for business, early sales included a new Zhang Xiaogang painting at Pace, Green Wall- Husband and Wife, 2010, for $1m to an Asian buyer, as well as a large-scale Sterling Ruby, which went for $110,000 to another Asian buyer. Perrotin sold two Aya Takano paintings for $125,000 each to Chinese and Korean buyers, while Lehmann Maupin, whose stand is chiming with the sound of sandals stamping on Do Ho Suh's installation, Floor had sold Tracey Emin's 2010 neon installation, I Promise To Love You, for £55,000 to an Indonesian collector from Jakarta, and an Emin embroidery, Nothing Happened, 2009, for £14,000 to a Singapore collector who only collects female artists.

However, other buyers appear to be heeding the words of collector Richard Chang, whose advice to neophytes was to "take your time. Don't buy on impulse, and try to see art from everywhere." With the weekend still ahead, dealers expect to finalise sales before the fair and auctions end on Sunday.

For many dealers, this fair is the first step in the long march to cracking the burgeoning Asian market, and several said they are thinking of opening in the region. Gagosian has found a new gallery on the island, while Pace, who already has a Beijing branch, is eying up possible new spaces in Hong Kong and Shanghai. London's Michael Hoppen is one of several dealers hoping to open a Hong Kong outlet: "You'd be mad not to," he says.