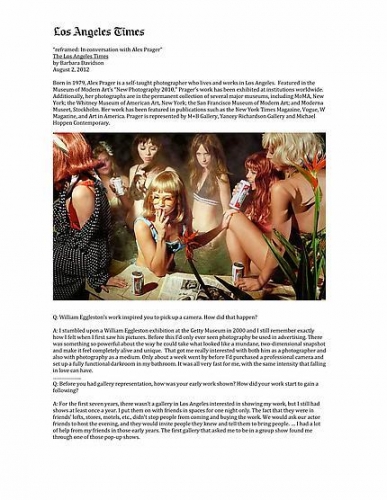 reFramed: In conversation with Alex Prager
By Barbara Davidson

Born in 1979, Alex Prager is a self-taught photographer who lives and works in Los Angeles.  Featured in the Museum of Modern Art’s “New Photography 2010,” Prager’s work has been exhibited at institutions worldwide.  Additionally, her photographs are in the permanent collection of several major museums, including MoMA, New York; the Whitney Museum of American Art, New York; the San Francisco Museum of Modern Art; and Moderna Museet, Stockholm. Her work has been featured in publications such as the New York Times Magazine, Vogue, W Magazine, and Art in America. Prager is represented by M+B Gallery, Yancey Richardson Gallery and Michael Hoppen Contemporary.


Q: William Eggleston’s work inspired you to pick up a camera. How did that happen?

A: I stumbled upon a William Eggleston exhibition at the Getty Museum in 2000 and I still remember exactly how I felt when I first saw his pictures. Before this I’d only ever seen photography be used in advertising. There was something so powerful about the way he could take what looked like a mundane, two-dimensional snapshot and make it feel completely alive and unique.  That got me really interested with both him as a photographer and also with photography as a medium. Only about a week went by before I’d purchased a professional camera and set up a fully functional darkroom in my bathroom. It was all very fast for me, with the same intensity that falling in love can have.


Q: Before you had gallery representation, how was your early work shown? How did your work start to gain a following?

A: For the first seven years, there wasn’t a gallery in Los Angeles interested in showing my work, but I still had shows at least once a year. I put them on with friends in spaces for one night only. The fact that they were in friends’ lofts, stores, motels, etc., didn’t stop people from coming and buying the work. We would ask our actor friends to host the evening, and they would invite people they knew and tell them to bring people. … I had a lot of help from my friends in those early years. The first gallery that asked me to be in a group show found me through one of those pop-up shows.


Q: Your photographs are a surreal collection of meticulously crafted moments — much like movie stills. Can you tell me about the staging process and casting for your images?

A: I’ll come up with an idea of what kind of scene I’m going to create, then I’ll start looking around for locations and start casting by going through my phone book of people I know, or looking on Facebook at friends of friends. If I can’t find what I’m looking for that way, I’ll post an ad on Craigslist or go to a casting company. The productions I do now can be very involved, like movie sets, or they can still be really small with just me and the model. It all depends what the idea is.


Q: How much of your final image is crafted in post-production?

A: I’d guess that only about 70% of the image is complete after the initial photo shoot. A lot of my creative process takes place in post now, as well as on the shoot. … The ideas I have for a picture don’t always work out as well on the actual photo shoot, so sometimes I’ll spend a lot of time creating an entirely new concept in post-production with the images I have shot. This isn’t always the case, but I’m very open to my shoots not coming out as planned because I know I have a whole other process afterward that allows me to create something that might be even better than the idea I had originally thought up.


Q: There is a seamless cinematic reference between your still photographs and your short films. Have you always had a passion for film? How did the evolution from still images to moving images come about?

A: People kept coming up to me and asking me what I thought had happened just before, or after, one of my still photographs. That gave me the idea to play around with that concept of moving images, which is how I got to “Despair.” Since I began working more in film, it has become something else for me.  There’s so much for me to explore in the area, and it’s challenging for me in a different way than photography.


Q: How has the work of Cindy Sherman, Enrique Metinides, David Lynch and Alfred Hitchcock help shaped the way you create …  if at all?

A: Besides providing endless amounts of inspiration for new ideas, just the fact that they exist, and that the work they created is in the world for me to look at. What I mean is, they are each examples of someone going out there and making something from nothing and having a huge effect on people. That takes loads of courage and hard work and, most of all, believing in their ideas despite all of the obstacles. That is inspiring all on its own.


Q: Your short films, in particular your latest “La Petite Mort,” are actually pretty large productions. Do you enjoy directing so many moving parts on such a large scale?

A: Yes, I find it extremely difficult and exhilarating. I don’t know how directors manage a full two hours! My longest film is “La Petite Mort,” which came in at just over seven minutes, and it took almost everything I had to make that. After the few experiences I’ve had in film, I have an entirely new and profound respect for anyone working in the film industry. There are so many little pieces to the overall puzzle, it’s quite extraordinary.


Q: How did the concept for “Compulsion,” your latest body of work, come about?

A: With all the talk of the Apocalypse surrounding the year 2012 and the world going through some of the worst natural disasters I’ve seen, not to mention all the tragedies caused by humans, and the way the media sensationalizes things — I created “Compulsion” as a response to these events.


Q: What are you working on now? Are you moving more into the world of filmmaking?

A: You could say I’ve expanded into the world of filmmaking. In a way it’s an extension of what I was already doing. … Also, the end of August I’m opening my first solo show at Foam Museum in Amsterdam. It opens August 30th and runs until the end of October. They are showing my latest series, “Compulsion” and my new short film, “La Petite Mort.”


Q: You seem seem to be drawn to red shoes and tornadoes?

A: “The Wizard of Oz” and “The Red Shoes” are two of my favorite movies. I love the colors and the simplicity of the way the stories are told.