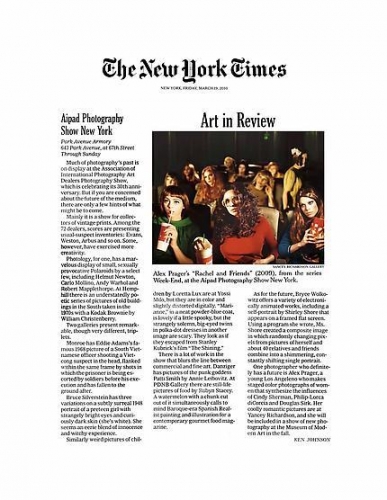 
Much of photography’s past is on display at the Association of International Photography Art Dealers Photography Show, which is celebrating its 30th anniversary. But if you are concerned about the future of the medium, there are only a few hints of what might be to come.

Mainly it is a show for collectors of vintage prints. Among the 72 dealers, scores are presenting usual-suspect inventories: Evans, Weston, Arbus and so on. Some, however, have exercised more creativity.


Photology, for one, has a marvelous display of small, sexually provocative Polaroids by a select few, including Helmut Newton, Carlo Mollino, Andy Warhol and Robert Mapplethorpe. At Hemphill there is an understatedly poetic series of pictures of old buildings in the South taken in the 1970s with a Kodak Brownie by William Christenberry.


Monroe has Eddie Adams’s famous 1968 picture of a South Vietnamese officer shooting a Vietcong suspect in the head, flanked within the same frame by shots in which the prisoner is being escorted by soldiers before his execution and has fallen to the ground after.

Bruce Silverstein has three variations on a subtly surreal 1948 portrait of a preteen girl with strangely bright eyes and curiously dark skin (she’s white). She seems an eerie blend of innocence and witchy experience.


Similarly weird pictures of children by Loretta Lux are at Yossi Milo, but they are in color and slightly distorted digitally. “Marianne,” in a neat powder-blue coat, is lovely if a little spooky, but the strangely solemn, big-eyed twins in polka-dot dresses in another image are scary. They look as if they escaped from Stanley Kubrick’s film “The Shining.”

There is a lot of work in the show that blurs the line between commercial and fine art. Danziger has pictures of the punk goddess Patti Smith by Annie Leibovitz. At PDNB Gallery there are still-life pictures of food by Robyn Stacey. A watermelon with a chunk cut out of it simultaneously calls to mind Baroque-era Spanish Realist painting and illustration for a contemporary gourmet food magazine.


As for the future, Bryce Wolkowitz offers a variety of electronically animated works, including a self-portrait by Shirley Shor that appears on a framed flat screen. Using a program she wrote, Ms. Shor created a composite image in which randomly changing pixels from pictures of herself and about 40 relatives and friends combine into a shimmering, constantly shifting single portrait.

One photographer who definitely has a future is Alex Prager, a young Los Angeleno who makes staged color photographs of women that synthesize the influences of Cindy Sherman, Philip-Lorca diCorcia and Douglas Sirk. Her coolly romantic pictures are at Yancey Richardson, and she will be included in a show of new photography at the Museum of Modern Art in the fall.