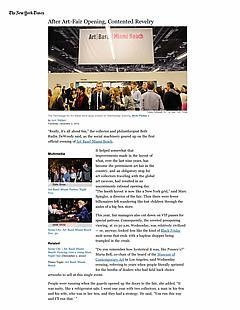 “Really, it’s all about fun,” the collector and philanthropist Beth Rudin DeWoody said, as the social machinery geared up on the first official evening of Art Basel Miami Beach.

It helped somewhat that improvements made in the layout of what, over the last nine years, has become the preeminent art fair in the country, and an obligatory stop for art collectors traveling with the global art caravan, had resulted in an uncommonly rational opening day. “The booth layout is now like a New York grid,” said Marc Spiegler, a director of the fair. Thus there were fewer billionaires left wandering like lost children through the aisles of a big-box store.

This year, fair managers also cut down on VIP passes for special patrons. Consequently, the coveted preopening viewing, at 10:30 a.m. Wednesday, was relatively civilized — or, anyway, looked less like the kind of Black Friday mob scene that ends with a hapless shopper being trampled in the crush.

“Do you remember how hysterical it was, like Penney’s?” Maria Bell, co-chair of the board of the Museum of Contemporary Art in Los Angeles, said Wednesday evening, referring to years when people literally sprinted for the booths of dealers who had held back choice artworks to sell at this single event.

People were running when the guards opened up the doors to the fair, she added. “It was nutty, like a refrigerator sale. I went one year with two collectors, a man in his 80s and his wife, who was in her 60s, and they had a strategy. He said, “You run this way and I’ll run that.’ ”

The new, less frenzied pace of admission facilitated making “a considered decision,” Ms. Bell added, although this should not be interpreted to mean that the collectors of high-ticket contemporary art have suddenly become impulse-averse.

“People have to decide quickly, or should,” said David Maupin, a principal in the Lehmann Maupin Gallery, who within 50 minutes of the show’s opening had already sold a video by Tony Oursler, a neon sculpture by the British artist Tracey Emin, a sculptural wall piece resembling crazed azulejo tiles by the Brazilian Adriana Varejao, one of Mickalene Thomas’s rhinestone encrusted paintings of a Pam Grier-style odalisque, and a suite of neo-Schnabel paintings by the young Puerto Rico-born artist Angel Otero.

Seated at a banquette at Mr. Chow’s restaurant in the W hotel, Mr. Maupin was visibly pleased by the events of the day. He was not alone. The restaurant had been taken over for a private dinner for 220 given jointly by the dealer Larry Gagosian; Wendy Murdoch, the wife of the media magnate; and Dasha Zhukova, an arts patron who, as both the daughter and the partner of Russian oligarchs, moves in a gilded aura of impossible good fortune.

Beneath silver balloon sculptures trailing streamers, waiters passed Champagne with the efficiency of field medics. A mixture of guests difficult to imagine anywhere but at Art Basel Miami Beach produced the contented ambient buzz of a happy hive. The floating balloons were like shiny cartoon thought bubbles, lacking only the words that tend to hover unspoken at events like this one: “What recession?”

Talking to Gary Tinterow, the man with the comic-operetta title of Engelhard Chairman of the Department of 19th-century, Modern and Contemporary Art at the Metropolitan Museum of Art, was Steven Cohen, the hedge-fund billionaire renowned for fearless spending (he once paid over $100 million for a work of art.) “Can you believe what he was asking?” Mr. Cohen asked, with mock horror, referring to the cost of an artwork seen at the fair. There is much to beggar belief at Art Basel, as Mr. Cohen knows. Sticker prices are the least of it.

In what other setting is one likely to find the Yankees third baseman Alex Rodriguez seated alongside Daphne Guinness, the fashion apparition, at dinner? Where else will you spot gorgeously clad nonentities like Nicky Hilton chatting up collector roués like Johnny Pigozzi (whose new LimoLand boutique sells clothes for “rich old men”), or Ben Stiller being introduced to Sheikh Mubarak Al-Muhairi, the Abu Dhabi developer, or an alarmingly taut-looking Calvin Klein rubbing shoulders with Julian Schnabel, rumpled as always in shorts and sneakers and looking as though he’d just come from mowing the lawn.

If Art Basel is, as Ms. DeWoody suggested, about the fun that can be had by those who seldom fly commercial, it is also a fixture along an ongoing social circuit, one where it is presumed that everybody knows everybody else, or else soon will.

“It’s a traveling party,” said Sam Orlofsky, a director of the Gagosian Gallery in New York. Only about a fifth of those on the tour are, in fact, serious art collectors. The rest are along for the ride.

“In the end,” Mr. Orlofsky added, “it’s about what else there is to do besides think about the fact that you’re super-rich.”