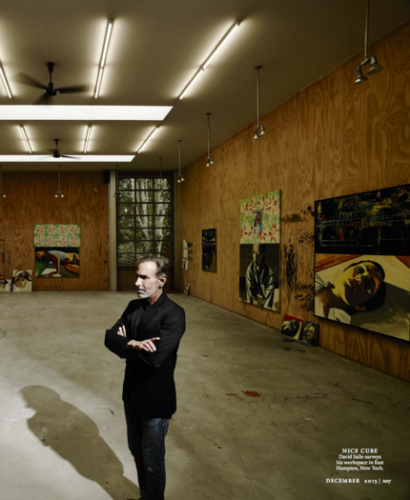 The artist David Salle is a slight, handsome man of 61, with dark hair worn slicked back, accentuating his appearance of quickness and lightness, of being streamlined. His house in Fort Greene, Brooklyn used  to be a Masonic lodge. It was transformed by the architect Chrisian Hubert into a still sanctuary studded with just-so objets: spindly chairs by Giò Ponti, works by Mark Grotjahn, George Baselitz, and Amy Sillman. The front door funnels you straight upstairs, since Salle’s studio occupies the whole of the first floor. It’s capacious by any standard, but it’s still in New York City. His creativity blooms farther east, on the East End of Long Island, a place whose fabled light and seascapes have made it a haven for artists since the days of the Tile Club, a secret society formed in 1877 as part of the Aesthetic Movement, whose mem-bers included William Merritt Chase, Stanford White, and Francis Hopkinson Smith.

Like the artist himself, Salle’s East Hampton house—or houses, for the property is a series of small buildings, some new, some from the mid-18th century—is understated and impec-cable. Linked by narrow pathways, the houses look like lily pads. From the driveway you can hear the undertone of the ocean, but you can’t see much beyond a rosy wall. His studio—a “modernist box,” he calls it—is the first thing you encounter, an outbuilding with the edge of a riotous canvas visible through its slim glass door. It’s an apt first impression for an artist whose compositions often contain internal frames, portholes, and windows within win-dows. (A friend once told Salle that he was the harbinger of the Windows application.)

The rectangular structure, open at both ends, is graciously proportioned and stamped with skylights. Salle left the inside unpainted after the quote for the paint job sounded high, and then he got to like it. It’s a shed, in a way, if sheds have a Platonic ideal. The pond—formerly a kidney-shaped swimming pool, converted into a freshwater habitat for some delightfully rib-bity frogs—is visible from the back window, where a daybed doubles as resting place and springboard. Dagmar, Salle’s hyperintelligent vizsla, loves nothing more than to chase a bird across the yard and then return the same way she vaulted out. “She’s always allowed in the studio, except when she’s not,” Salle says with a laugh. “I’ve had a lot of studios. You get to know what works and what doesn’t.”

Leaving the studio you cross a tranquil stretch of lawn to get to the main house. “It’s a simple house,” Salle says, “basically two rooms.” It’s not false modesty—a Joe Farrell wedding cake this isn’t—but the two rooms are remark-able for their spaciousness and harmony, the art on the walls, and the view through their large windows and glass doors of the delicate slope of the lawn and the straight pines beyond. “I have a different routine here,” Salle says of the space. “It’s solitudinous. I’m already solitudinous, and more so here. I don’t see people much during the week. I paint a lot.” He also cooks—impressively—and reads and swims, in his pool (another rectilinear triumph) and at Georgica Beach. Friends and family visit on the weekend for good meals on the terrace. An hour spent there, feet in the silky shallows of the pool, wisteria overhead, Dagmar boomeranging after sticks… Well, you understand why, come the end of the summer, Salle is reluctant to leave.

His paintings today are recognizable descendants of the syncopated canvases he created in the 1980s and ’90s, when, per Janet Malcolm’s loopy, prickly profile “41 False Starts,” published in the New Yorker in 1994 and anthologized in her book of the same title this past spring, he established himself as America’s leading post-modernist painter. “For all their borrowings,” she wrote of his sampled compositions, “they seem unprecedented, like a new drug or a new crime.” (His current show, at the Per Skarstedt gallery in New York, through December 21, reveals a body of work made in 1992, when his studio was in Tribeca, but never exhibited.)

Since I began editing his T&C column on contemporary art, Salle has painted a lot. He has also gotten married—to the lovely, très chic Stephanie Manes. Their quietly glamorous wed-ding party, in his East Hampton garden, was a mix of movie directors, writers, and art world luminaries, all old friends whose abiding affection for the host was palpable and touching. When a snafu with my accommodation threatened to send me back to the city at the stroke of midnight, Salle insisted I stay the night—in my own building, no less. Before he purchased it, in 2005, the property belonged to Clockers author Richard Price, and his writing alcove, still scattered with a few dog-eared issues of the Paris Review, has a top floor, a tiny aerie with a pristine bed and what Salle calls “good juju” for putting pen to paper. I spent the next morning inspecting the art—Donald Baechler, Francesco Clemente, Louise Dahl-Wolfe, Martha Dia-mond, Eric Fischl, Alex Katz, and a 1970 water-color of Wichita by William Dickerson (Salle’s first art teacher)—and plashing in the pool with his winsome nine-year-old stepdaughter, Georgia. Later in the summer I was test-driv-ing a Maserati Quattroporto (a car I knew he admired and in which he and I vroomed around the back roads), and I dropped by in time for lobster rolls with Ricardo Kugelmas, a smooth Brazilian (and Francesco Clemente’s studio manager) who was dressed in a toga: the Kugel-maharishi for a deity-themed series of portraits commissioned for a Dallas rotunda.

Malcolm’s portrait of the artist describes Salle’s “sharp, odd mind and cool, irritable temperament.” I agree with the first and not at all with the second. Perhaps Salle has changed, or perhaps it was Malcolm. Besides being a fiercely accomplished person, he is an unusually genuine and generous one. Long ago he wrote, in a note to Malcolm, “I feel that the only thing that really matters in art and in life is to go against the tidal wave of literalism and literal- mindedness—to insist on and live the life of the imagination. A painting has to be the experience, instead of pointing to it.” Listening to Salle, reading him, and observing his work and life is to know that he has done, and can’t help but keep doing, the only thing that really matters.