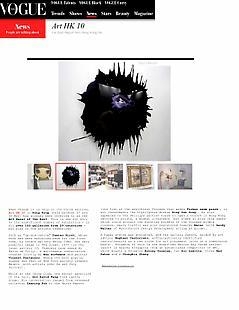 Even though it is only in its third edition, Art HK 10 in Hong Kong (held between 27 and 30 May) has already been referred to as the Art Basel of the East. This is due not only to its significant number of exhibitors – in all over 155 galleries from 29 countries – but also to the artists themselves.

Such as "up-and-coming" Damien Hirst, whose work has been exhibited here for the first time, by London gallery White Cube. One very powerful image is The Creek, 1977 (in the local gallery 10, Chancery Lane owned by Katie de Tilly), a multimedia installation created jointly by Baz Lurhmann and painter Vincent Fantauzzo. Among the most popular stands was that of New York gallery Lehmann Maupin (with artists Do Ho Suh and Tony Oursler).

While at the China Club, the social satellite of the fair, Sir David Tang took centre stage. His conversation ranged from renowned collector Canning Fok to the Hurun Report (the list of the wealthiest Chinese that makes Forbes seem passé), to art investments (he highlighted Korean Ding Yan Yung), He also appealed to the Phillips auction house to open a branch in Hong Kong devoted to prints, a modest investment (but aimed at blue chip names) which could attract the bursting pockets of the Chinese middle classes. Heavy traffic was also registered towards Macao (with Sandy Walter of Wynn/ Encore Design Development acting as guide).

A happy ending was announced, and the gallery owners guided by art advisor Raphael Castoriano, enthusiastically identified casino/ resorts as a new niche for art placement (also on a commission basis). Evidence of this is a brand new Marina Bay Sands casino-resort in nearby Singapore (now an established competitor of HK), which boasts a 40-metre Antony Gormley, two Sol Lewitts, three Ned Kahns and a Chongbin Sheng.