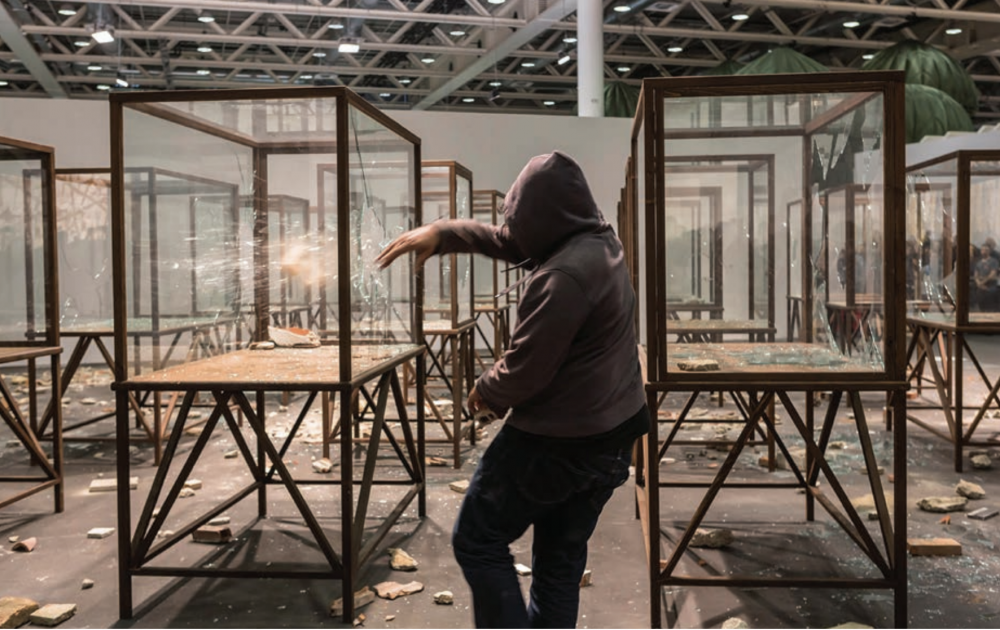 A hooded figure stalks the periphery of a cluster of 16 glass museum cases. He is thickset, prowling around the perimeters like a lone wolf. He is threatening, a figure heavy with unspent energy, wound up like a spring. Sometimes he takes on a casual air of nonchalance, a brief stroll; at other moments, one senses a targeted intent. The cases themselves are tall and elegant – gleaming glass framed by slender struts. The floor around them is littered with pieces of broken stone and, as the eye focuses, one realises the cases are not, in fact pristine. Instead they show holes and cracks, fissures in the glass like spider webs, growing ever outwards. The figure bends down, picks up a rock and throws it at one of the panes of glass. The rock bounces off harmlessly, the structure more resilient than it appears. The vandal is not to be deterred, however. He picks up the same piece again and throws it, spinning it like a discus thrower, raising his arm to shield his face at the exact moment it makes contact and sends shards of glass flying. Pane by pane, the process is repeated, the cases gradually becoming more shattered until, at one point, the figure stands up. As he straightens, the hood of his hoodie slides back and reveals a mane of hair. The anonymous, threatening figure reveals itself to be Kader Attia – the artist himself.

Arab Spring (2014) has previously been displayed as an installation piece, such as at Galleria Continua’s solo exhibition for Attia, The Beginning of the World, in Beijing last summer. At this year’s Art Basel Unlimited, however, the gallery and artist presented it as a performance piece, leaving the remnants of the broken cases on display. The piece, as many are familiar with it, deals with the intrinsic failure of the Arab Spring to bring about real change and refers pointedly by the looting of the Egyptian Museum in Cairo in the wake of political unrest. “As far as I am concerned, as an Algerian, I have always been sceptical of the ‘Arab Spring’, and have been afraid from the beginning that it would lead to religious dictatorships (or military ones), which, sadly, is what has happened in the end,” says Attia. “The situation continues to deteriorate, and every day something happens that reminds us that freedom still needs to be fought for. This is why it is important to me to keep showing and reactivating this work for as long as possible.”

One important departure in the presentation of the work this time around is the performance of the smashing of the cases in public – in this instance, during the fair’s preview. “In previous incarnations, the same performance happened except it wasn’t in public,” explains Attia. “I guess I’m a little shy. However, the more I thought about it, the more I felt the performance was also part of the work. So I decided to share it with the audience.” In fact, Attia’s work often has an immersive and interactive element to it, such as with his large-scale installation, Continuum of Repair: The Light of Jacob’s Ladder at London’s Whitechapel Gallery last year. “I am fascinated by the ambivalence between the mind and the body,” he says, “and between the body and the space (actually the architecture...). We read an artwork visually, intellectually, but also physically through our body.”

At Art Basel, the 40-something minute performance reminded audiences of the violence inherent in the act of looting. The pieces of rock and masonry thrown by Attia were taken from destroyed buildings, demonstrating “how from the fragments of one destruction another destruction will follow: it is the endless process of blind violence.” As his hoodie falls back and the light falls on his face, we see an angry man, frustrated at the endless loop of fundamentalism and violence that has engulfed what people had believed to be a new beginning. Yet the same figure also embodies the new hope that arose as grassroots revolts sought to bring down the established order. “We become a part of this circulation of reappropriation and repair,” Attia says. “Arab Spring shows that a revolution – itself a process of repair – always carries injuries in itself and that we have to accept it in order to move forward.” As the hoodie slides back, Attia steps out of the shadows of anonymous violence and into the light, ready to move forward.