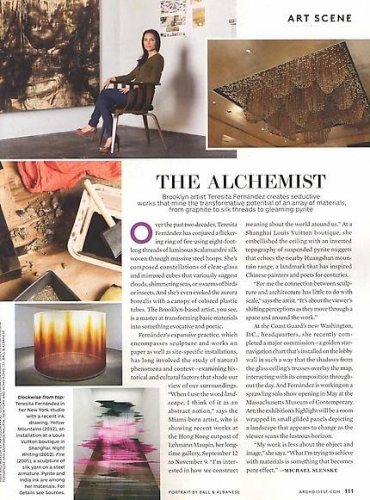 The Alchemist
By Michael Sienske


The Brooklyn artist creates seductive works that mine the transformative potential of an array of materials, from graphite to silk threads to gleaming pyrite

Over the past two decades, Teresita Fernández has conjured a flickering ring of fire using eight-foot-long threads of luminous Scalamandré silk woven through massive steel hoops. She’s composed constellations of clear-glass and mirrored cubes that variously suggest clouds, shimmering seas, or swarms of birds or insects. And she’s even evoked the aurora borealis with a canopy of colored plastic tubes. The Brooklyn-based artist, you see, is a master at transforming basic materials into something evocative and poetic.


Fernández’s expansive practice, which encompasses sculpture and works on paper as well as site-specific installations, has long involved the study of natural phenomena and context—examining historical and cultural factors that shade our view of our surroundings. “When I use the word landscape, I think of it as an abstract notion,” says the Miami-born artist, who is showing recent works at the Hong Kong outpost of Lehmann Maupin, her long-time gallery, September 12 to November 9. “I’m interested in how we construct meaning about the world around us.” At a Shanghai Louis Vuitton boutique, she embellished the ceiling with an inverted topography of suspended pyrite nuggets that echoes the nearby Huangshan mountain range, a landmark that has inspired Chinese painters and poets for centuries.

“For me the connection between sculpture and architecture has little to do with scale,” says the artist. “It’s about the viewer’s shifting perceptions as they move through a space and around the work.”


At the Coast Guard’s new Washington, D.C., headquarters, she recently completed a major commission—a golden star-navigation chart that’s installed on the lobby wall in such a way that the shadows from the glass ceiling’s trusses overlay the map, interacting with its composition throughout the day. And Fernández is working on a sprawling solo show opening in May at the Massachusetts Museum of Contemporary Art; the exhibition’s highlight will be a room wrapped in small gilded panels depicting a landscape that appears to change as the viewer scans the lustrous horizon.

“My work is less about the object and image,” she says. “What I’m trying to achieve with materials is something that becomes pure effect.”