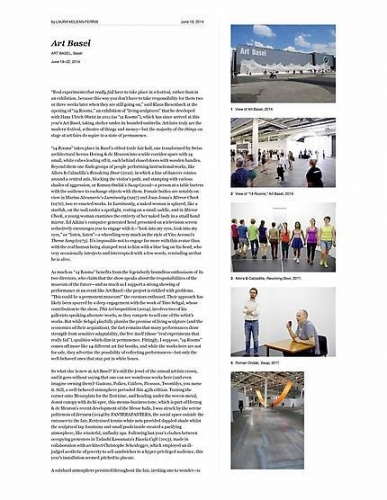 
“Real experiments that really fail have to take place in a festival, rather than in an exhibition, because this way you don’t have to take responsibility for them two or three weeks later when they are still going on,” said Klaus Biesenbach at the opening of “14 Rooms,” an exhibition of “living sculptures” that he developed with Hans Ulrich Obrist in 2011 (as “11 Rooms”), which has since arrived at this year’s Art Basel, taking shelter under its branded umbrella. Art fairs truly are the modern festival, a theatre of things and money—but the majority of the things on stage at art fairs do aspire to a state of permanence.


“14 Rooms” takes place in Basel’s oldest trade fair hall, one transformed by Swiss architectural heroes Herzog & de Meuron into a wide corridor space with 14 small, white cubes leading off it, each behind closed doors with wooden handles. Beyond them one finds groups of people performing instructional works, like Allora & Calzadilla’s Revolving Door (2011), in which a line of dancers rotates around a central axis, blocking the visitor’s path, and stamping with various shades of aggression, or Roman Ondák’s Swap (2011)—a person at a table barters with the audience to exchange objects with them. Female bodies are notably on view in Marina Abramovic’s Luminosity (1997) and Joan Jonas’s Mirror Check (1970), two re-enacted works. In Luminosity, a naked woman is splayed, like a starfish, on the wall under a spotlight, resting on a small saddle, and in Mirror Check, a young woman examines the entirety of her naked body in a small hand mirror. Ed Atkins’s computer-generated head presented on a television screen seductively encourages you to engage with it—“look into my eyes, look into my eyes,” or “listen, listen”—a wheedling very much in the style of Vito Acconci’s Theme Song (1973). It’s impossible not to engage far more with this avatar than with the real human being slumped next to him with a blue bag on his head, who very occasionally interjects and interrupts it with a few words, reminding us that he is alive.


As much as “14 Rooms” benefits from the legendarily boundless enthusiasm of its two directors, who claim that the show speaks about the responsibilities of the museum of the future—and as much as I support a strong showing of performance at an event like Art Basel—the project is riddled with problems. “This could be a permanent museum!” the curators enthused. Their approach has likely been spurred by a deep engagement with the work of Tino Sehgal, whose contribution to the show, This is Competition (2004), involves two of his gallerists speaking alternate words, as they compete to sell one of the artist’s works. But while Sehgal playfully plumbs the premise of living sculpture (and the economics of their acquisition), the fact remains that many performances draw strength from sensitive adaptability, the live itself (those “real experiments that really fail”), qualities which dim in permanence. Fittingly, I suppose, “14 Rooms” comes off more like 14 different art fair booths, and while the works here are not for sale, they advertise the possibility of collecting performances—but only the well-behaved ones that stay put in white boxes.


So what else is new at Art Basel? It’s still the jewel of the annual art fair crown, and it goes without saying that one can see wondrous works here (and even imagine owning them)! Gustons, Polkes, Calders, Picassos, Twomblys, you name it. Still, a well-behaved atmosphere pervaded this 45th edition. Turning the corner onto Messeplatz for the first time, and heading under the woven-metal, donut canopy with its hi-spec, this-means-business tone, which is part of Herzog & de Meuron’s recent development of the Messe halls, I was struck by the serene politeness of Zerzura (2014) by PANTERAPANTERA, the social space outside the entrance to the fair. Restrained tennis-white nets provided dappled shade whilst the sculptural tap fountains and small pools inside created a pacifying atmosphere, like a tasteful, unflashy spa. Following last year’s clashes between occupying protesters in Tadashi Kawamata’s Favela Café (2013), made in collaboration with architect Christophe Scheidegger, which employed an ill-judged aesthetic of poverty to sell sandwiches to a hyper-privileged audience, this year’s installation seemed pitched to placate.


A subdued atmosphere persisted throughout the fair, inviting one to wonder—is everyone tired? Or is everything just running extremely smoothly? Even in Unlimited, the fair’s showcase of megaworks that steamroll towards the viewer, as if it were in a never-ending Tate Modern Turbine Hall, there was a more polite, less-is-more approach in 2014. An elongated Carl Andre floor piece, Steel Peneplain (1982) shown by Düsseldorf’s Konrad Fischer Galerie, lengthened quietly through the space. Sam Falls’s Untitled (Pallet 9, Pomona) (2013) at Zürich’s Galerie Eva Presenhuber is an orange textile work made by placing pallets on top of a long piece of fabric in the bright sunshine until they created fade marks, then stretching the fabric hammock-like through the hall like a thin smile. Alice Channer’s snakeskin printed drapery, High Tide (2014) at London’s The approach, hung from the ceiling in an upside down T-shape, gracefully weighed down by small, smooth pebbles. Nick Mauss’s pair of gauzy, painted curtains, Untitled (2014) at New York’s 303 Gallery, moved quietly along mechanized rails as though choreographed.


There were two standout video works: Alex Prager’s Face in the Crowd (2013) at Lehmann Maupin from New York and Harun Farocki’s Parallele I-IV [Parallel I-IV] (2012–14), presented by Galerie Thaddaeus Ropac from Paris/Salzburg. Prager’s video features the underrated actress Elizabeth Banks as its blonde, coiffed, Hitchcockian lead. When Banks acts in the crowd scene as if she is a star performer, the earlier, confessional interviews with actors are theatricalized; accompanied by a soaring and cinematic score with strings, the gesture is a rejection of both herd-like behavior and overwrought “acting”; each individual performs a starring role in the great movie of their lives, desiring of the camera’s gaze. Farocki’s Parallele I-IV is a multi-screen installation that tracks the various ways in which the development of digital graphics and video games has created a grammar of images and modalities underwriting our ways of seeing the world. As we watch a virtual breeze ruffle digital leaves, a flat-voiced narrator reminds us: “in cinema there is the wind that blows and the wind blown by a wind machine. In computer games there is only one type of wind.”


Returning to the main fair, and faced by what feels like a billion works, I can say I was thrilled by the booth of New York’s Andrea Rosen Gallery, which outed its representation of the estate of Polish artist Alina Szapocznikow (1926–1973). It featured a beautiful installation of Photosculptures (1971/2007), the artist’s photographs of chewed gum, alongside three Lampe Bouches (1966-67), lips in red or pink on stems lit from within, which were so covetous I enquired as to the price (between 350,000 and 380,000 Euro—there’s a premium on the red lips).


Perhaps without the Venice Biennale or Documenta to coincide with the fair—which have both come to proxy-curate many selections of artists at Art Basel—it’s the current and upcoming museum shows and retrospective exhibitions that have largely dictated the selection of works this year. Several Jeff Koons inflatables were strategically placed at different booths around the fair in advance of the artist’s solo show opening next week at New York’s Whitney Museum of American Art. Hulk Wheelbarrow (2004/13), a faux-inflatable Incredible Hulk pool toy pushing a wheelbarrow of flowers at international behemoth Gagosian Gallery, had its own security guard to dissuade the inevitable desire to touch the sculpture in a “I-can’t-believe-it’s-polychromed-bronze” moment. It was placed in front of Richard Prince’s Spiritual America 3 (2013), the incendiary, infamous image of a young, naked Brooke Shields, blown up large to poster-size, with modesty pixels over the pubic area. This was as close as I got to seeing any fuss at this fair. In the lead-up to Robert Gober’s Museum of Modern Art retrospective in New York, we were gifted a look at a new sculpture, Untitled (2013-14), of beeswax limbs with human hair, spotted with barnacles and threaded through what looked like white, knarled wooden slats. There was also a gorgeous presentation of small, scrappy Richard Tuttle works at London’s Modern Art/Stuart Shave: Tuttle takes on Tate Modern’s Turbine Hall this October.


There was applause for the fair’s film program at Stadtkino Basel, located just next door to the Kunsthalle Basel across the river; its theatrical setting made for a far better engagement with the works. The screening that I attended of the silent, 16mm film, Papagaio (2014) by artists Pedro Paiva and João Maria Gusmão, depicting frenetic African voodoo rituals, was hushed and attentive. Statements, the section dedicated to younger galleries, was better placed this year upstairs at the main fair after it languished next to Unlimited last year. Marie Lund’s concrete casts of the inside of backpacks and sun-bleached curtains were a standout at London’s Laura Bartlett Gallery. The Feature sector with “curated” booths ran along the periphery, and many of them had a political flavor, including Sanja Iveković at Valencia’s espaivisor, Santiago Sierra at Berlin’s KOW, and David Wojnarowicz at New York’s P.P.O.W, as well as Dara Birnbaum at London’s Wilkinson Gallery; this handful of works heightened the somewhat uncomfortable awareness that feminism, war, sexual politics, and everything that that comes along with them, only found traction at the fair’s margins.


As ever, Gavin Brown’s enterprise from New York was the only dealer to intervene with the booth format; lining the walls was the late Sturtevant’s (1924–2014) work Serpentine Owl Wallpaper (2013), a repeated stock image of an owl on a green background, which covered everything. It was exactly the right irreverent tribute to the artist. Hung on top of the wallpaper was a large Alex Katz painting, On Time (2001), which featured a gray-on-gray crowd of soberly dressed individuals—art fair types in smart coats and white shirts, standing around smartly, as neat and stylish as anything. On time, well-dressed, good-looking, and ready to go. It effectively served as a representation of the people who run this whole show. Everything seemed to go smoothly, and money changed hands in frictionless fashion. But there were few surprises. Thus, little experiment, and little failure. Are you immensely pleased?