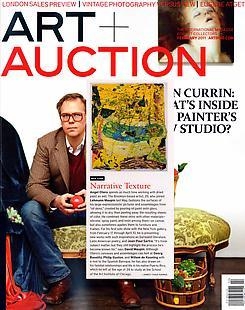 Angel Otero spends as much time working with dried paint as wet. Thr Brooklyn-based artist, 29, who joined Lehmann Maupin last May, fashions the surfaces of his large expressionistic pictures and assemblages from “oil skins,” created by pouring oil paint into glass, allowing it to dry, then peeling away the resulting sheets of color. He combines these skins with other materials-silicone, spray paint, and resin among them-on canvas but also sometimes applies them to furniture and frames. For his first solo show with the New York gallery, from February 17 through April 10 he is presenting new works with such inspirations as Surrealist literature, Latin American poetry, and Jean-Paul Sartre. “It’s fresh subject matter, but they still highlight the process he’s become know for,” says David Maupin. Although Otero’s canvases and assemblages can hint at Georg Baselitz, Philip Guston and Willem de Kooning with a nod to the Spanish Boroque, he has also drawn on his familial relationships and life in his native Puerto Rico, which he left at the age of 24 to study at the School of the Art Institute of Chicago.