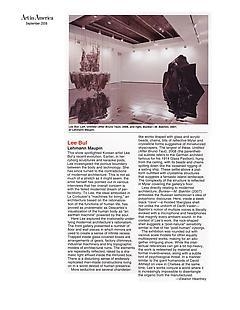 This show spotlighted Korean artist Lee Bul's recent evolution. Earlier, in her cyborg sculptures and karaoke pods, Lee investigated the porous boundary between the body and technology. She has since turned to the contradictions of modernist architecture. This is not as much of a stretch as it might seem: the artist herself has pointed out in various interviews that her overall concern is with the failed modernist dream of perfectibility. To Lee, the ideal embodied in Le Corbusier's "machines for living," an architecture based on the rationalization of the functions of human life, has proved as problematic as Descartes's visualization of the human body as "an earthen machine" powered by the soul.

Here Lee explored the irrationality underlying modernist architecture's rationalism. The front gallery presented a number of floor and wall pieces in which mirrors are used to create a sense of infinite recess. Trapped inside glass-covered boxes are arrangements of gears, factory chimneys, industrial machinery and tiny topographic models of architectural ruins. The elements are repeatedly reflected, raked by a dramatic light affixed inside the mirrored box. There is a disturbing sense of endlessly replicated man-made constructions living on in a world devoid of human presence.

More seductive are several chandelier-like works draped with glass and acrylic beads, chains, bits of reflective Mylar and crystalline forms suggestive of miniaturized skyscrapers. The largest of these, Untitled (After Bruno Taut), 2008 (the parenthetical subtitle refers to the German architect famous for his 1914 Glass Pavilion), hung from the ceiling, with its beads and chains spilling down like the loosened rigging of a sailing ship. These settle above a platform outfitted with crystalline structures that suggests a fantastic island landscape. The complexity of the structure is reflected in Mylar covering the gallery's floor.

Less directly relating to modernist architecture, Bunker-M. Bakhtin (2007) embodies the Russian semiotician's idea of polyphonic discourse. Here, inside a sleek black "cave" - a molded fiberglass shell not unlike the uniform of Darth Vader - Bakhtin's notion of multiple voices is literally evoked with a microphone and headphones that magnify every ambient sound. In the context of Lee's work, the rock-shaped shell suggests a "post-natural" sensibility similar to that of her "post-human" cyborgs.

The exhibition was rounded out with various scale models for other equally multilayered works, making for an altogether intriguing show. While the intellectual references can get a bit top-heavy, the work is redeemed by material and formal inventiveness, along with a subtle hint of psychological threat. In a manner similar to the giant humanoids of David Altmejd on view in Chelsea at the same time, Lee's works conjure a world where it is increasingly impossible to disentangle the organic from the manufactured.