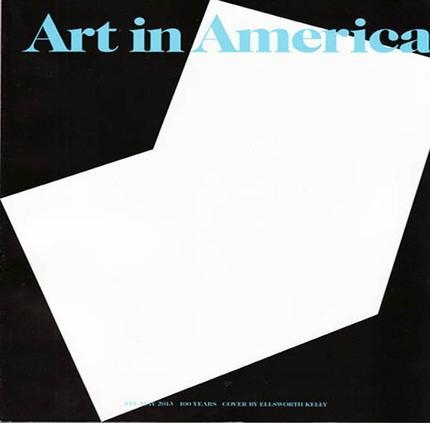 SHEATHED IN GLASS, Lever House is one of Manhattan’s most impressive landmarks of International Style architecture. Flooding the building’s ground floor with silvery city light, the transparent walls create a congenial environment for sculpture. Painting too, benefits from natural illumination, but here it’s problematic. Enclosed by glass, the wide open space offers no surfaces suitable for hanging canvases. The obvious solution is to build gallery-style walls within the enclosure. But when David Salle was invited to show recent paintings in the space last fall, he collaborated wit architect Christian Hubert and came up with a better plan.

First, translucent scrims were stretched from floor to ceiling, one for each of the six works (all 2012) in Salle’s series “Tapestries/Battles/Allegories.” The paintings were then hung on wooden panels attached to floor-mounted metal support rods several feet high. “I wanted the works to float in the space like jewels,” Salle wrote in an e-mail exchange, adding the scrims provided wall-like backdrops without blocking out too much light. With each scrim and panel partially hidden by a painting, the elements of the Lever House installation were as layered as Salle’s images.

Layering, insetting, juxtaposing- these have been Salle’s tactics ever since he emerged in the late 1970s, when he quickly achieved stardom tinged with notoriety. The artist’s detractors attacked his willfully indifferent drawing and his propensity for placing female figures in awkwardly sexual postures. Admirers saw in these provocations the signs of a sensibility impatient with propriety and inclined to irony. If art progresses by breaking the rules, why not turn basic assumptions on their heads and present the so-called bas as good? This is Salle’s largest irony, and early on it became one of his basic tenets.

In much of art, there is no point in meeting a pre-established standard- that of proper drawing, for example, or harmonious composition or thematic coherence. A work of art succeeds by improving fresh results from nonstandard premises, and Salle has always had a knack for premises both quirky and grand.

TOWARD THE END OF THE 1980s, Salle began layering his image-fragments over scenes displaced in toto from 17th – and 18th – century sources. A borrowing of this kind might show a gambling scene by some follower of Caravaggio, or a landscape graced by a couple in bucolic costume.

Sherrie Levine and other Salle contemporaries are clear about the origins of their appropriated images, the better to advance critiques of originality and authorship. None of that critique holds much interest for Salle, who spreads a deliberate fog over questions of provenance. Of the battle scenes that unfurl across two of the paintings in the Lever House exhibition (Campaign and Standoff), the artist says only that he found them in hand-painted wallpaper from the 19th century. Tapestries of an earlier era supplied the draped and half-draped figures in Fusco and The Intelligence. The exception to the rule of unclear origins is The River, which features an enlargement of Fur Traders Descending the Missouri (1845), George Caleb Bingham’s best- known image of the American frontier.

Bingham’s palette has the glowing delicacy of a Luminist landscape. Shifting the image into a more somber key, Salle limits himself to a narrow range of slate blues. The painting drifts by on a current of pastoral melancholy. Obscuring the faces of the fur trader and his young companion, a wide smear of pink paint introduces a manic note. Above and below are imprints of human bodies, in yellow and blue, and so we assume that the pink is a trace of a body dragged across the full width of this 10 ½-foot wide canvas. The imprints are new to Salle’s repertory. He made the first of them just last year and they cavort in profusion through all the canvases at Lever House. Aside from The River, with its austere revision of Bingham’s Fur Traders, the paintings on the show are rife with warm ochers and oranges. When skies are visible, they are bright blue. Clouds are fleecy white. Yet these works also feel elegiac, for their underlying images evoke eras of lost opulence and refinement. Even the battle scenes look like exercises in politesse. In Diana, the goddess is half-draped, double and ultimately unplaceable. This is not Titian’s Diana, or Tiepolo’s or Boucher’s. Acknowledging only that he found her in an obscure tapestry, Salle reminds us that images are a kind of currency. Revised as they pass from hand to hand, they gain value, lose it, gain it back again. Salle understands, of course, that value of this kind cannot be precisely calculated. We can only feel it, as the aura of meaning that an image accrues from having survived from one era to the next.

A SMALL, RECTANGULAR fragment of landscape appears at the midpoint of Diana. Not just an overlay, this is a separate image painted on a stretched canvas inserted into the larger one-a sort of window onto another world. The Intelligence features two of the paintings- within – a - painting. On the right is a portrait, in grisaille, of a young woman’s face in three-quarter profile; on the left is a picture of a toylike house in picture-book colors. The large images, so deftly interrupted by the small ones, are populated by men and women costumed in the satin and silk drapery of traditional painting. To the grandeur of these figures and stilted clarity of the inset pictures, the overlaying body prints answer with a blurred liveliness. Some of these anatomical traces are not easy to decipher. Yet they all stand- or lie- in stark contrast to their obvious forebears, the images Yves Klein made in the 1960s by smearing pigment on bodies and using them as brushes.

The models that Klein recruited for the production of his “Anthropometrics” were always female and the pigment was always International Klein Blue. Salle’s body-prints are orange, yellow, gray, a dark, nearly Kleinian blue, and aquamarine. Moreover some of Salle’s imprinted anatomies are male. He therefore evokes humankind in general, unlike Klein who tried to capture on pristine canvases the shadow of ideal feminine beauty.

Using found images as the grounds for further imagery, Salle’s canvases are anything but pristine. Nonetheless, he could be seen as a purist of sorts- a devotee of art – about - art. Focusing on his structural devices his balancing and counterbalancing of line and shape and color, we could see him as an ironic formalist- an abstract painter who chooses, for some reason, to work with representational imagery.

These views are not so much wrong as incomplete. And Salle’s new body-prints are a great help in getting a fuller view of his work. No feeling of the ideal, timeless or transcendent emanates from them. Each is the trace of a vanished immediacy, a lost present. Yet none of them drifts into the various pasts- American or European, real or imaginary- that the artist’s other images bring to mind. A Salle painting arranges regions of time in a counterpoint so intricate that the only thing we can grasp with any certainty is the mood the painting engenders.

MY USE OF A MUSICAL term like counterpoint gets some justification from Fuse, a title chosen in honor of the composer who wrote the scores for most of Michelangelo Antonioni’s films. Giovanni Fusco had an extraordinary range, drawing on everything from Italian folk music to the symphonic canon. Movie music amplifies the emotional like in a film. Gathering his imagery from a staggering variety of sources (including the movies), Salle layers them over each other like music over a narrative. Of course, none of his paintings has ever presented a story, and the bit of imagery you see for a moment as the hint of a plot may function the next moment like a musical inflection. Layering lets Salle create one medium (painting) complexities equivalent to those a director creates with two (music and film). And the results are always recognizably his own.

Long ago, painters saw personal style as the enemy of authentic art. The Abstract Expressionist Jack Tworkov once declared that he didn’t want to paint ant “Tworkovs.” Despite this fretting about authenticity, he and his contemporaries, like de Kooning and Rothko, gave their mature work an immediately identifiable look. By the time Salle arrived in the scene, young painters were expected to present signature styles in their inaugural exhibitions. Resisting this imperative, Salle made his mark not with a single style but by engineering clashes between disparate styles, themes and even methods of painting. Unsettling the pictorial, he generates a disquiet impossible to dispel with mere reason.

Salle never gives us puzzles to work out, yet the restless pressure of thought permeates every canvas. As meanings flicker in and out of view, moods kick in, shifting from melancholy to joy and back again. And sometimes we feel the full spectrum of emotions all at once.