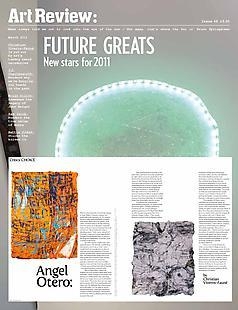 Western culture has been, from Greek statuary to Justin Bieber's Grammy, nothing if not perpetually youth-obsessed. Art, for instance, fancies its talent green and freshly scrubbed (and naively cheap, too, if you please). Such callow connoisseurship is a bit like preferring one's fruit unripe and undersized - especially today, as the twice-annual shopping raids on art schools from Yale to Goldsmiths bring in dwindling returns. 'Youth', said a cutting Cyril Connolly, 'is a period of missed opportunities'. Grizzled George Bernard Shaw, no slouch in the old grouch department, concurred: 'Youth is wasted on the young'.

Yet while 'maturity' evades even a few seasoned artists - the eternally youthful Peter Saul (seventy-six) comes to mind - some notable freshmen emerge every so often to upset the notion that experience is the best teacher and that youth must be easily deceived. New York-based painter Angel Otero is the latest gimlet-eyed exception to the rule that wise souls cannot come in precocious packages, making his mark via an outsider's vigorous moxie and what American politicians - of both sexes and from both sides of the aisle - now openly plump as 'testicular virility'.

Born in Puerto Rico, Otero is the firstborn son of an insurance-agent father and a bank-teller mother. Despite an early facility with drawing, his stolidly middle-class upbringing did not much augur a future set-to with global visual culture. 'My art education was very vague and my parents didn't know anything about art', Otero told The Huffington Post of growing up arty in the tropics. 'For me, early on, art was painting landscapes ... then a guy showed me images of a Pollock painting [in a book] and it shocked me; it felt very liberating that the world accepted that as art.'

After graduating from university in San Juan, Otero sold insurance by day and painted by night, until he received a scholarship to the School of the Art Institute of Chicago. By the shores of Lake Michigan he experienced both snow and a total immersion in art, as well as an embarrassing sense of his own rusticity. Asked in class to name his favorite contemporary artist, Otero blurted out, 'Jackson Pollock!' 'How does it feel to live in the 1950s' his instructor teased as his fellow students laughed. Six years later, Otero was awarded the coveted Leonore Annenberg Fellowship. No one laughs harder than the bumpkin once he's arrived.

Moving from art-school grad to accomplished young artist - his shows include Kavi Gupta gallery, Chicago's Museum of Contemporary Art, a recent attention grabbing appearance at Art Basel Miami Beach as well as an upcoming solo at New York's Lehmann Maupin Gallery - Otero quickly became a virtuoso of the newfangled mash up of abstract and figurative painting that constitutes today's new Nouveau Realisme (think Mark Bradford sans the racial essentialism). Starting with figurative canvases that combined assemblage and more conventional applications of oil on canvas, Otero has formulated a body of work that recently cashiered personal motifs (previously drawn from his own island history). The results are both post-postmodernist and cussedly original - a sort of 'back to the future' of painting that literally crumples the medium, then lays it wide open to certain chance events.

The singularity of Otero's work is indivisible from his particular species of process-oriented formal innovation. Painting in reverse, with a nod to the film Memento (2000), he applies oil paint onto large sheets of glass. Once these have dried (which can take up to two weeks), Otero peels the oil paint off their surfaces with a set of 'blades', then adheres their buckled compositions onto canvas, amending their broken surfaces with additional painted gestures, shapes and letters. "These procedures", Otero told me, "produce surprises to which I've become addicted". Assembled negatively - like a print or photographic film - Otero's recent text-based invocations of twentieth-century philosophy (which include quotes from Sartre, among other totemic figures) also serve as visual essays in metaphysical instability for our own stunningly unreflective, culturally dumbfounded time.

Otero's most recent pictures are, in fact, as much about collage as they are about decollage - the tearing away or removal of pieces of an original image. Using a working method that suggests a lineage to poster rippers Raymond Hains and Mimmo Rotella as well as kinship to younger sculptors such as Brian Dettmer and Ishmael Randall Weeks, Otero's practice has become a significant thresher of influences. Young in years, his painting and sculpture strives to excavate meaning from art and its traditions with the resoluteness of a veteran.