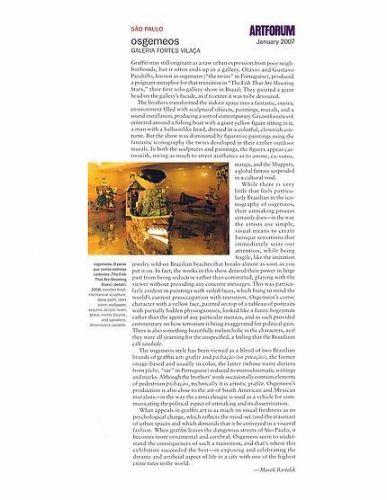 Graffiti may still originate as a raw urban expression from poor neighborhoods, but it often ends up in a gallery. Otavio and Gustavo Pandolfo, known as osgemeos ("the twins" in Portuguese), produced a poignant metaphor for that transition in "The Fish That Ate Shooting Stars," their first solo gallery show in Brazil: They painted a giant head on the gallery's facade, as if to enter it was to be devoured.


The brothers transformed the indoor space into a fantastic, oneiric environment filled with sculptural objects, paintings, murals, and a sound installation, producing a sort of contemporary Gesamtkunstwerk centered around a fishing boat with a giant yellow figure sitting in it, a man with a balloonlike head, dressed in a colorful, clownish costume. But the show was dominated by figurative paintings using the fantastic iconography the twins developed in their earlier outdoor murals. In both the sculptures and paintings, the figures appear car-toonish, owing as much to street aesthetics as to anime, ex-votos, manga, and the Muppets, a global fantasy suspended in a cultural void.

While there is very little that feels particularly Brazilian in the iconography of osgemeos, their artmaking process certainly does--in the way the artists use simple, visual means to create baroque sensations that immediately seize our attention, while being fragile, like the imitation jewelry sold on Brazilian beaches that breaks almost as soon as you put it on. In fact, the works in this show derived their power in large part from being seductive rather than committed, playing with the viewer without providing any concrete messages. This was particularly evident in paintings with veiled faces, which bring to mind the world's current preoccupation with terrorism. Osgemeos's comic character with a yellow face, painted on top of a tableau of portraits with partially hidden physiognomies, looked like a funny bogeyman rather than the agent of any particular menace, and as such provided commentary on how terrorism is being exaggerated for political gain. There is also something beautifully melancholic in the characters, as if they were all yearning for the unspecified, a feeling that the Brazilians call saudade.


The osgemeos style has been viewed as a blend of two Brazilian brands of graffiti art: grafite and pichacao (or pixacao), the former image-based and usually in color, the latter (whose name derives from piche, "tar" in Portuguese) reduced to monochromatic writings and marks. Although the brothers' work occasionally contains elements of pedestrian pichacao, technically it is artistic grafite. Osgemeos's production is also close to the art of South American and Mexican muralists--in the way the carnivalesque is used as a vehicle for communicating the political aspect of artmaking and its dissemination.

What appeals in graffiti art is as much its visual freshness as its psychological charge, which reflects the mind-set (and the traumas) of urban spaces and which demands that it be conveyed in a visceral fashion. When graffiti leaves the dangerous streets of Sao Paulo, it becomes more ornamental and cerebral. Osgemeos seem to understand the consequences of such a transition, and that's where this exhibition succeeded the best--in exposing and celebrating the dreamy and artificial aspect of life in a city with one of the highest crime rates in the world.