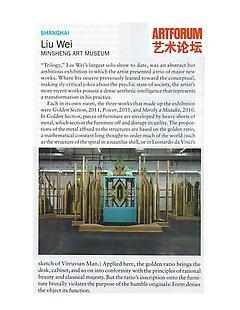 "Trilogy," Liu Wei's largest solo show to date, was an abstract but ambitious exhibition in which the artist presented a trio of major new works. Whcrc his oeuvre prcviously lcancd toward the conceptual, making sly critical jokes about the psychic state of society, the artist's more recent works possess a dense aesthetic intelligcnce that represents a transformation In his practice.

Each in its own room, the three works that make up the exhibition were Golden Section, 2011, Power, 2011, and Merely a Mistake, 2010. In Golden Section, pieces of furniture are enveloped by heavy sheets of metal, which section the furniture off and disrupt its utility. The proportions of the metal affixed to the structures arc based on the golden ratio, a mathematical constant long thought to order much of the world (such as the structure of the spiral in a nautilus shell, or in Leonardo da Vinci's
sketch of Vitruvian Man.) Applied here, the golden ratio brings the desk, cabinet, and so on into conformity with the principles of rational beauty and classical majesty. But the ratio's inscription onto the furniture brutally violates the purpose of the humble originals: Form denies the object its function.

Power is a collection of cathode-ray-tube television sets, symbolizing a technology all but obsolete today. The television monitors are stacked together; horizontal lines of light pulse across them. A timer turns the screens on and off, switching between states of animation in violent cracks of electricity and noise. The work strikingly echoes Liu's 2009 solo exhibition, "Yes, That's All!, at Boers-Li Gallery in Beijing, where rows of television monitors with jammed signals manifested a disturbance. But what Power shows is not feedback or white noise. Its title, in the Chinese original (which translates literally as "On/Off") and in its English version, points to sobering, time-worn questions: What kind of quantity is this "power"? And who operates it?

Where Golden Section and Power embody the brutality of restriction and control, Merely a Mistake is transcendent. The work is built from the discarded wooden debris of demolished buildings, repurposed here in pavilions and platforms of skeletal semi-Gothic arches. The beams that make up the soaring arches are rough, made from poor quality construction materials dotted with splinters and flecked with chips of pastel paint. Yet an edifice to spirituality arises from the debris of its absence. Merely a Mistake, shown previously at the 2010 Shanghai Biennale, is most similar to some works from Liu's "China" series, 2005-, in which ceramic vessels are arranged in the shape of rockets. But the military-cultural complex of that series has given way to an organic architecture of the vernacular that searches for the spiritual in the midst of godlessness.

The works of "Trilogy" are forthright and ponderous, embodying on the one hand those unseen pressures that imperceptibly draw the social boundaries we live within, and then breaking free of them in Merely a Mistake. It's a new direction for Liu, leaving behind the representative for the imaginative, but one that could possibly offer answers to questions that he has already articulated.