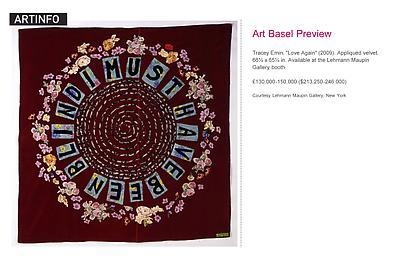 BASEL, Switzerland— The art world has no doubt come a long way since the Great Crash of last November, but if last month's hit-or-miss auctions are any indication, the market is still far from stable. As art fairs in particular struggle to gain their footing in a world still reeling from the effects of the recession — a world populated with collectors who take longer to think and are slower to buy — it will be interesting to see how Art Basel, generally considered the mother of all art fairs, fares.

This year's edition, the 40th, running June 10–14, boasts some 300 galleries — roughly the same number as last year, which is a good sign. In terms of different sections of the fair and extracurricular programming, the usual suspects will all be present: Art Unlimited, Public Art Projects, Art Basel Conversations, Art Film, and so on, in addition to the host of satellite fairs like Scope, Volta, and Liste, although the fledgling PrintBasel announced the cancellation of its 2009 edition in March, citing economic troubles.

One highlight of the lineup is the second-ever presentation of "Il Tempo del Postino," a live show consisting of a series of time-based artworks by the likes of Tacita Dean, Matthew Barney, Olafur Eliasson, and Fischli & Weiss, each of whom gets a snappy and (idiomatic) 15 minutes. "Il Tempo" will be playing at the Theater Basel for three nights: June 10–12 at 8:30 p.m.

But for the more traditionally minded, wondering what artworks can be found at the actual booths, look no further. Whether you can't make it to Basel, or you'd like a sneak peek before you hit the fair yourself, ARTINFO has compiled here a preview of works on offer from 42 galleries. Though the state of the market might be up in the air, the quality of the art is as solid as ever.