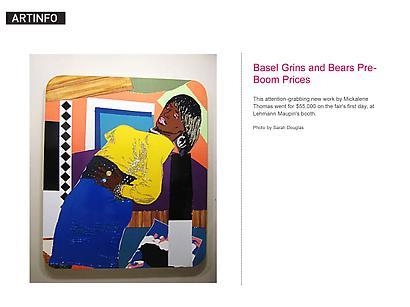 BASEL— If Art Basel is a test of the art market, the art market has passed. Not necessarily with flying colors, but, as one dealer put it yesterday, paraphrasing Mark Twain, "Rumors of its death have been greatly exaggerated." And, although in general collectors were taking their time to make decisions, there was a healthy number of sales shortly after the opening bell, and many dealers did better than they thought they would.

There was general agreement among market observers that dealers had brought safer work this year. "No one is trying to reinvent the wheel this time," said art adviser Todd Levin. "They just want a smooth ride." What was bolstering the fair, Levin added, was the fact that dealers had stayed away from "pieces that make unruly demands on collectors" and had stuck with works that are "reasonably fresh to market, where it's about known quality and known quantity. And where, price-wise — whether secondary or primary — the consignor or artist has a sense of what the market can bear."

Essentially, dealers had propped up the market by bringing good material. "If there's ever a time to pull out the stops and bring the A+ works out of the closet, this is it," observed another art adviser, Cristin Tierney.

Not long after the fair opened, Richard Feigen sold 10 works by the late Ray Johnson, for prices ranging from $16,000 to $36,000. Mitchell-Innes & Nash sold pieces by Cy Twombly and Jean Tinguely, and Lucy Mitchell-Innes observed that the preview day this year was better than last year's. She did admit noticing "more conservative buying — collectors are back to proven artists," and observed that there is "more activity in Impressionist sales. A year and a half ago, it was much more difficult to sell a Pissarro."

Proven artists were certainly selling. Robert Mnuchin at L&M Arts revealed that in the fair's opening hours he'd sold a large Donald Judd copper stack from 1987. Rather than disclose the exact price, he said diplomatically that it had "traded at an appropriate price for the new reality." (Mnuchin's colleague Dominique Lévy had told the Art Newspaper the asking price was "under $4 million.")

David Zwirner reportedly sold a Neo Rauch painting to Brad Pitt, and also parted with works by Gordon Matta-Clark, Francis Alÿs, Adel Abdessemed, On Kawara, Luc Tuymans, and others. Through a representative, Zwirner said, "2009 is not 2008, but it feels like 2007."

Upstairs, where the art on view is generally younger, New York's Jack Shainman Gallery brought a showstopping booth of new paintings by Kerry James Marshall and sold two of them — a large work called Untitled (Painter) for $350,000 and a smaller, untitled one for $225,000 — to major American museums. Shainman said the fair "seems positive. Business is being done here."

At fellow New York gallery Lehmann Maupin, co-owner Rachel Lehmann sat in front of an equally attention-grabbing new work by Mickalene Thomas, whose recent exhibition at the gallery was well received. It sold on the fair's first day, for $55,000. "Collectors are buying; business is active," Lehmann says, but "we are noticing very few Americans. Our sales today went to 99 percent Europeans." She added that "the first day was positive, but people do hesitate now when the numbers get bigger."

Over at Deitch Projects, Jeffrey Deitch had sold two stencil-and-collage works by Shephard Fairey at $25,000 apiece, a luminous new painting by Kristin Baker for $85,000, and more expensive, secondary-market pieces by Francesco Clemente and Andy Warhol for undisclosed prices. (Warhol himself had once given the piece in question, a green self-portrait, to the late artist and fashion designer Stephen Sprouse, and, in one of the fair's more engaging displays, it hangs next to a Sprouse work that also sold, for $65,000.)

"There was a psychological shock in October, November, and December," Deitch observed of the recent art market. "But we still saw plenty of traffic at the gallery, and consistent good sales of a younger generation of artists. Going into the spring, overall, the mood got better."

At Berlin gallery Contemporary Fine Arts, a number of pieces had sold in the fair's first few hours, including a large sculpture by Thomas Houseago and a sizable painting by Georg Baselitz that, at €375,000 ($528,000), was one of the booth's priciest items. And at Berlin and Leipzig gallery Eigen+Art, owner Gerd Harry Lybke was ebullient. Among other works, he'd parted with a large new painting by David Schnell, for €60,000. Asked how the fair was going in its early hours, he got right to the point: "Great, perfect, sensational."

And even with the recession, some young artists are still generating buzz — and copious sales. On Monday night, when the Art Statements section for solo shows by emerging artists opened, New York's Bortolami sold a handful of small and medium-sized paintings by Richard Aldrich, at $5,000 and $7,000, as well as a larger piece for $14,000. Nearby, collectors had flocked to Karlsrühe, Germany, gallerist Iris Kadel's booth to snap up paintings and works on paper by Benedikt Hipp, which sold for as little as €1,200 apiece (prints were even cheaper). The largest painting in the booth, which sold almost immediately, was around €10,000. Andreas Pucher, a Stuttgart-based collector and a proud owner of Hipp's work, pointed out that getting pieces by him is "very difficult. He's really successful, even in the crisis."