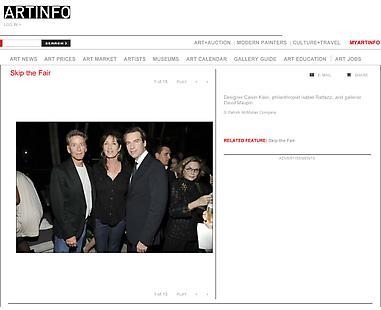 MIAMI BEACH, Fla.— Even before Art Basel Miami Beach opened, New York gallerist Paul Kasmin was celebrating, hosting an intimate dinner at the Standard hotel on Tuesday night for friends in honor of designer Mattia Bonetti, who spent a good portion of the evening sitting with Christian Louboutin, whose transcendent red-souled shoes have been spotted on a sizeable portion of Miami's population so far this week. Also spotted: legendary Berlin gallerist Max Hetlzer and designer Genevieve Jones.

By last night, everyone was in town, and, despite the flurry of activity at the Art Basel Miami Beach preview, which lasted until 9:00 p.m., everyone knew that the real action was taking place elsewhere, as dealers, artists, and local establishments through parties to thank supporters and hopefully attract some new ones.

First off, gallerists Rachel Lehmann and David Maupin were hosting a cocktail for their artist Teresita Fernandez at the Setai resort, welcoming the likes of designer Calvin Klein, writer Stefano Tonchi, and P.S.1 chairman Agnes Gund to the elegant fete. The event was co-hosted by Pinacoteca, which bills itself as "the first art travel advisory to offer curated cultural experiences specializing in art, collecting, and lifestyle." An august performance.

Zurich-based Galerie Gmurzynska was also partying at the Setai, and, after a busy day of rather mixed headlines, they certainly deserved it. On the positive side, everyone had wanted a look at the paintings by action hero Sylvester Stallone for sale at their booth. On the slightly less positive side, they'd drawn an equal amount of attention for the visit they received from U.S. Marshals, who confiscated a few of their paintings at the behest of dealer Ashel B. Edelman, to whom, a court recently decided, Gmurzynska owes money.

Armed law enforcement agents may be able to seize paintings, but they thankfully can't cart away parties, and after a busy day at the fair, Gmurzynska's party proceeded without a problem. The event was held in honor of Stallone, who looked impossibly youthful, and British royal Princess Michael of Kent, clad entirely in white and gold.

The party attracted an illustrious group of collectors, celebrities, businessmen and women, and numerous mermaids, who swam around prettily while guests caroused. Warner Bros. executive Lyor Cohen was spotted chatting up gallery director Krystyna Gmurzynska, who sported a jacket of metallic purple, while Stallone's wife, Jennifer Flavin (no relation to the famed minimalist) chatted with magician Mark Mitton. Even art journalism legend Anthony Haden-Guest was on hand, looking casually amused as he toasted the evening with a glass of sparkling wine.

The "bubbly" also played a central role at Bruce High Quality Foundation's party to celebrate its new exhibition at the W Hotel, where Dom Perignon had signed on as the event's sponsor. After toiling in obscurity for a few years, the Bushwick, Brooklyn-born collective is moving in headier circles these days, as evidenced by the plush turnout, which included the likes of patrons Leo Villareal, Yvonne Force Villareal, and the ever-present artist Terence Koh.

Also on hand at the W Hotel was Vito Schnabel, who has backed some of the Foundation's activities through his fledgling dealership. Other Schnabels, namely Lola and Jaqueline were present, making it truly a family affair, albeit with its most famous member absent. If father Julian was there, he was playing it low-key, which seems fitting: the art world's annual hajj to Miami is about new discoveries, and, at the W Hotel last night it seemed clear that a new generation was making itself known.