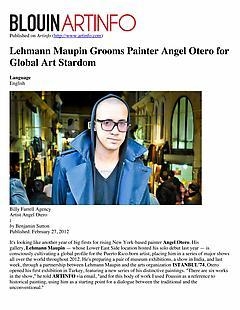 It's looking like another year of big firsts for rising New York-based painter Angel Otero. His gallery, Lehmann Maupin — whose Lower East Side location hosted his solo debut last year — is consciously cultivating a global profile for the Puerto Rico-born artist, placing him in a series of major shows all over the world throughout 2012. He's preparing a pair of museum exhibitions, a show in India, and last week, through a partnership between Lehmann Maupin and the arts organization ISTANBUL'74, Otero opened his first exhibition in Turkey, featuring a new series of his distinctive paintings. "There are six works in the show," he told ARTINFO via email, "and for this body of work I used Poussin as a reference to historical painting, using him as a starting point for a dialogue between the traditional and the unconventional."

Otero's painting process is anything but conventional, but also has broad appeal. He begins by applying layers of oil paints on glass in reverse order; once the paint is half-dry he scrapes it off the glass and applies the richly textured oil skin surface to a canvas. The resulting compositions reveal surprising bursts of color and produce unexpected wrinkles in Otero's imagery. "I can control about 50 percent of the end result," he says. "But those limitations and the uncertainty are what spark the dialogue that I aim for."

Asked how his works — which are so engaged with the history of Western painting — might translate in a Turkish context, Otero isn't worried. "Turkey is very rich in history and culture," he writes. "I think that viewers here will receive the work in a more historical sense, rather than thinking about process, which is what many Westerners focus on."

For now, Otero's focus is on a full schedule of upcoming exhibitions that will keep him busy in his Queens studio until the end of the year. "I am finishing up works for my first show in India, which was arranged through Lehmann Maupin," he explains. "The show will be at a new gallery called Galeri Isa in Mumbai. After that I will focus on preparing for two museum shows, one in June and the other in October." He wouldn't say where those exhibitions will be held, but if the momentum his young career has gathered is any indication, we'll all know soon enough.