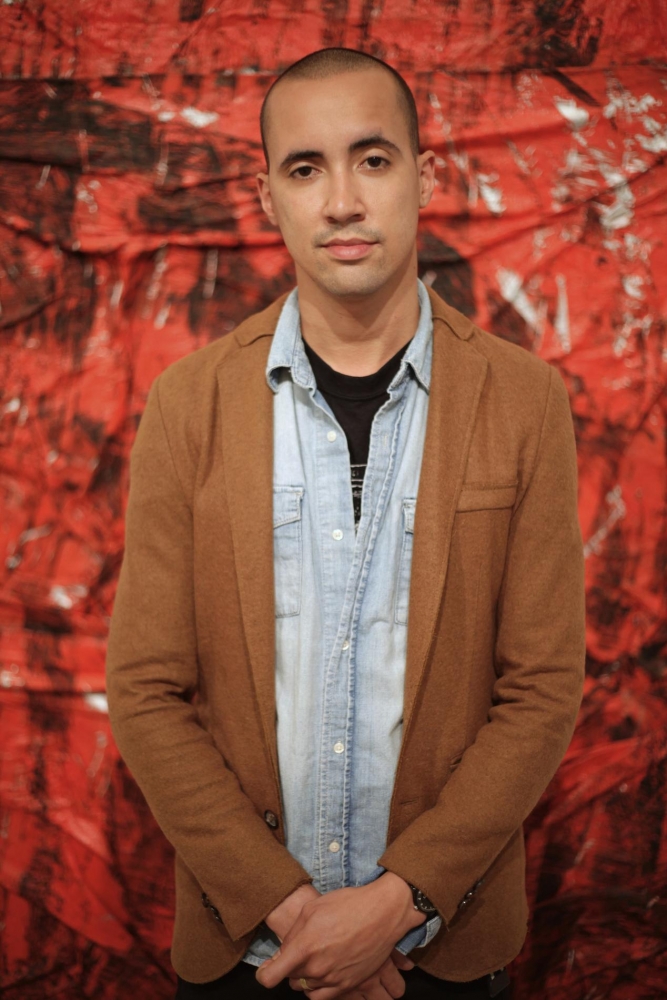 Instead of canvas, artist Angel Otero paints on plexiglass. He builds his vivid compositions using oil paints, allowing one layer to dry before painting over it. Some of his paintings have three or four of these layers; others contain upwards of twelve or fifteen. When Otero, 36, is done with one, he peels “the skin” from the plexiglass.

Usually, the final part of Otero’s process is to adhere the skin onto canvas. But in his newest works, which will be exhibited in his solo show Angel Otero: Elegies at the Bronx Museum in New York City, he embedded fabric into the oil skins, which he then cut and collaged to form more sculptural works. The seven resulting pieces are imposing—some are over 10 feet long—and contain striking colors in their layers.

Many of the skins used for the pieces in Elegies were originally finished for other projects that for various reasons didn’t work at the time. But the recycled material befits Otero’s preoccupations: memory and the past, subjects with which his work has always dealt. In each of his layers, Otero paints what he calls “references,” specific personal and art historical images that he blends together through layered abstraction.

“There’s always a dialogue with the past, fighting the artists you admire and the ones you maybe don’t admire so much,” says the Puerto Rico-born, Brooklyn-based artist. “It’s interesting to take a subject that’s been explored over time and see how you put it in a context that’s not just your voice.”

Otero cites artists including Nicolas Poussin, Willem de Kooning, Jackson Pollock and Pablo Picasso as influences. For Elegies, guest curator Christian Viveros-Fauné approached him with the idea to create an exchange with the abstract expressionist Robert Motherwell, who over 19 years completed over 100 paintings he collectively titled Elegy to the Spanish Republic. Like Otero, Motherwell thought understanding the “whole culture of modern painting” was crucial to being an intelligent artist.

Otero talked to WSJ. about his process, what happens when he doesn’t like how a work turns out and the way he incorporated memories in his new work.

All of the paintings for the Bronx Museum are so uniquely shaped. Is this the first time you’ve worked with paintings shaped this way?
Yes, I always had this idea of working from a more sculptural way with the material and I was creating skins with oil paint together with this very particular fabric. I just started cutting them and changing them—making compositions on the floor pretty much.

Do the new works have a subject?
There’s a lot that has to do with memory. In some way, I think all my works have dealt in the subject of memory. The materials [I used for them] were meant to be collaged on canvas in my past, and I just thought they were not as successful as others. My work is process-oriented, and there are moments where, because of the process, the turnout is unexpected.

What happened when you didn’t like how these works turned out?
Sometimes there are some [works] that I just felt didn’t feel [were] right, or they weren’t strong enough, but I didn’t think it was something that I needed to discard, you know? I thought they were materials with a lot of possibilities so I just accumulated them for a long time. And then this moment arrived when I wanted to make work that felt a lot more sculptural. I thought it was interesting that I maintained this sort of hope and then the idea finally came to me and I executed it.

You’ve said before that painting needs to be justified over time. Can you clarify?
I’ve always [felt the need to] constantly justify painting to myself. It’s kind of difficult to put painting in a unique language or context that just stands by itself. There’s this dialogue between the future of the medium and you as an artist and history in general. I think they all collapse together.

I’ve noticed that there’s this circle where people say—for reasons social or political, and then having to do with material and process—”Painting is dead” and then, “Painting is alive.” I’ve been aware of that in the air, but I try not to let it be something that gets me to the point of frustration as an artist working in my studio.

Has your process changed or developed over time?
It has. I think I have always had this impulse of stepping away from my comfort zones, and I have worked and dealt a lot with pictures of my family, as well as sculptures of ceramic and metal that reminded me of the gate of the house that I grew up in. Those are my sculptural works. And then you have my body of work based on Nicolas Poussin, where I recreate a painting of his and layer it over and over—I make these very classical paintings very abstract. I have always lingered, or danced, between the personal and the art historical. Although these subjects are very different, they both connect into the idea of how I feel about memory.

Do the paintings in the new exhibition refer more to personal memories or art historical ones?
I think they actually collapse since they’re made from all the skins I accumulated from different bodies of work. I wasn’t really working with them knowing that they represent this or that individually. I brought them out and started working with them from a very abstract or emotional perspective, using all of them together.

Source
Back To Top