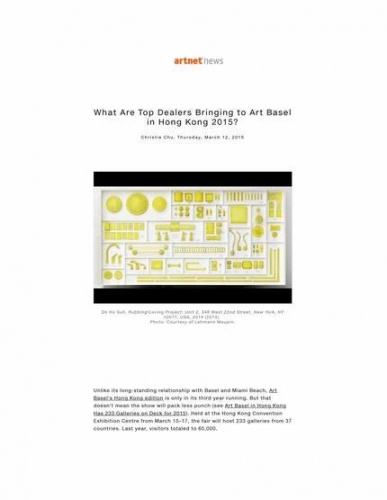 What Are Top Dealers Bringing to Art Basel in Hong Kong 2015?
By: Christie Chu


Unlike its long-standing relationship with Basel and Miami Beach, Art Basel's Hong Kong edition is only in its third year running. But that doesn't mean the show will pack less punch (see Art Basel in Hong Kong Has 233 Galleries on Deck for 2015). Held at the Hong Kong Convention Exhibition Centre from March 15–17, the fair will host 233 galleries from 37 countries. Last year, visitors totaled to 65,000.


In addition to the main event hall, there will be smaller sections. “Insights" is dedicated to solo shows and themed exhibitions by 34 galleries with spaces in the Asia-Pacific regions. “Discoveries" will show emerging artists in solo or two-person projects. “Encounters" has large-scale installation pieces on exhibit. “Film" will screen films and video works. And, of course, talks and panel discussions round out the programming.


We talked to a few top dealers participating this year at Art Basel in Hong Kong to see what they were bringing and why.


Clearly the customer has become more savvy in terms of artist diversification, and galleries are responding. Lock Kresler, senior director of Dominique Lévy's new London space, which opened in the fall (see Dominique Lévy Opening London Gallery), mentioned that the gallery exhibited once before in Hong Kong two years ago, when it presented a solo booth with Andy Warhol's Dollar Sign pieces. This year, the gallery will be focusing on Chinese painter Zao Wou-ki, and French painter Pierre Soulages (see Pierre Soulages Breaks $4 Million Mark at Sotheby's), while also bringing an array of other works including early gouaches by Yayoi Kusama, a two-part piece by Takashi Murakami, and paintings by Kazuo Shiraga (see Ben Davis on Why Kazuo Shiraga Was One of the World's Most Radical Painters and Still Is). Kresler says "It is challenging for a gallery that deals in many ways with the secondary market to find great and fresh material out there. And I think the best way we've been able to do it is to engineer an exhibition within the booth rather than just bringing pictures to the fair."


For New York dealer Marian Goodman's third year in Hong Kong, she will bring together artists that have had or will have major exhibitions in the Asia-pacific region—Annette Messager, Tony Cragg, Yang Gudong, William Kentridge, and Gabriel Orozco.


Berlin-based gallery Galerie Eigen + Art arrives for its fifth year in Hong Kong and third year showing at Art Basel in Hong Kong. The gallery will be bringing a roster similar to previous years because it wants their Asian customers to become more and more familiar with their artists, who include Carsten Nicolai, Marc Desgrandchamps, Uwe Kowski, David Schnell, and Tim Eitel. Senior director of the gallery Anne Schwanz believes business will be "absolutely great" this year, with Asian customers gaining interest in artists such as Carsten Nicolai "not only for his art but also because of his music."


New York gallery Lehmann Maupin, which opened their Hong Kong space two years ago, will present brand new works by Korean artist Do Ho Suh, who recently had a solo exhibition in New York (see Do Ho Suh Explains His Ethereal Rubbings), Mickalene Thomas, Alex Prager, and Tony Oursler. But the hot ticket at the booth according to director Jessica Kreps will be a gold chrome and Indian ink piece by Teresita Fernández. Kreps told artnet News, "What's great about Hong Kong is that it is a meeting place for all of Asia. We not only see our local collectors, but collectors from Indonesia, Korea, mainland China, and Singapore."


New York–based Fergus McCaffrey will bring works by Japanese avant garde artist Natsuyuki Nakanishi and market favorite Yayoi Kusama (see Who Are the 50 Top Selling Female Artists at Auction? and Popular Yayoi Kusama Retrospective Headed to Taiwan's Kaohsiung Museum of Fine Arts). Jesse Penridge, director of the gallery, told artnet News he is "looking forward to seeing how the date change [from May to March] is going to affect things." (See the 2014 article Five Theories on Why Art Basel in Hong Kong Is Moving to March Next Year.) Penridge says he believes it will most certainly not have a negative effect, especially because "the level of connoisseurship has remarkably increased every year." The choice of bringing Nakanishi and Kusama is a no-brainer for the gallery, as what it specializes in is Japanese postwar art, which conveniently nods aesthetically and culturally to the Asia-Pacific market.


Hong Kong–based Gallery Exit will be presenting a solo booth of Chinese artist Lui Chun Kwong's work. Arianna Gellini, director of exhibitions at the gallery told us, "Art Basel in Hong Kong is unique in its diversity and global outreach. There's a wide selection of regional emerging galleries, established ones, and solo presentations of international artists. The scope is really wide and this is I think what sets Art Basel in Hong Kong apart from other art fairs."