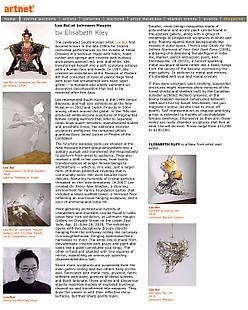 The celebrated South Korean artist Lee Bul first became known in the late 1980s for bizarre costumed performances on the streets of Seoul. Dressed in a bodysuit made with fabric, foam rubber and sponge and covered with bulbous protrusions painted red, pink and white, she transformed herself into a soft-sculpture octopus with a human face and hands. In 1997, she created an installation at the Museum of Modern Art that consisted of rows of plastic bags filled with dead fish ornamented with hand-sewn glitter -- a mordant and smelly comment on decorative decomposition that had to be removed after two days.

Lee represented South Korea in the 1999 Venice Biennale, and had solo exhibitions at the New Museum in 2002 and Deitch Projects in 2004 among others around the globe. In the '90s she produced white silicone sculptures of fragmented female cyborg warriors that refer to Japanese comic book super-heroines, manufactured bodies and prosthetic limbs; her elaborate monster sculptures prefigured the tentacled ghouls guarding Davy Jones' Locker in Pirates of the Caribbean.

The futuristic karaoke pods Lee showed at the New Museum turned group amusement into a solitary pursuit and transferred the responsibility to perform from artist to audience. They also marked a shift in her concerns, from bodily transformations of single female beings to architecture -- which is, in a way, just a larger form of human protective covering that is communally worn. Her work became more delicate, featuring hundreds of crystal particles threaded on thin wire armatures. In 2007, Lee created On Every New Shadow, a stunning environment for Paris's Foundation Cartier that included a silver scaffold tower, a mirrored floor reflecting an enormous hanging sculpture, and a pool of ammonia and India ink.

More glittering architectural hybrids of chandeliers and monsters can be found in Lee's latest New York exhibition, at Lehmann Maupin Gallery on Chrystie Street on the Lower East Side, Apr. 21-June 19, 2010. The exhibition opens with two deceptively droopy objects hanging from the entryway ceiling like carcasses in a slaughterhouse, bringing sadomasochistic harnesses to mind. The white one is made from polyurethane covered with gauze and paint and looks like a giant convoluted jock strap. The other is hard and studded with tiny squares of mirror, resembling an ominously sparkling disassembled disco ball.

Seven more sculptures are suspended from the main gallery ceiling and two others hang on the wall. Fabricated with metal rods, plywood, fabric stiffened with paint, portions of metal screens and black laminate, these pristine and dangerous objects resemble models of exploded buildings cleaned up and transformed into weapons. They draw the viewer in with their reflective shiny surfaces, but their sharp points repel.

Smaller, more benign maquettes made of polyurethane and acrylic paint can be found in the upstairs gallery, along with a group of renderings of prospective sculptures in white and grey, floating against black backgrounds like vessels in outer space. There's also Study for the Infinite Starburst of Your Cold Dark Eyes (2009), a drawing of a dissolving female figure in india ink, marker, pencil and acrylic paint. And Sternbau No. 28 (2010), a curvier sparkling metal sculpture shaped rather like a head, hangs from the ceiling of the balcony overlooking the main gallery. In addition to metal and mirrors, it's studded with oval and round crystals.

If they were enlarged, Lee's bristling, suspended structures might resemble shiny versions of the forest shacks and shelters built by the Canadian outsider architect Richard Greaves; or the booby-trapped mansion constructed between 1884 and 1922 by Sarah Winchester, the gun magnate's widow (as she tried to stave off death). Self-representation as disguise and body armor is extended to models of uninhabitable fantasy dwellings. Impressive as they are, these works are really chamber sculptures that hint at what Lee will do next. Prices range from $10,000 to $100,000.

ELISABETH KLEY is a New York artist and writer.