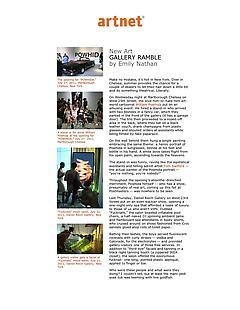 Make no mistake, it’s hot in New York. Over in Chelsea, summer provides the chance for a couple of dealers to let their hair down a little bit and do something theatrical. Literally.

On Wednesday night at Marlborough Chelsea on West 25th Street, the love-him-or-hate-him art-world cartoonist William Powhida put on an amusing event. He hired a stand-in who arrived with two blondes in a fancy car, which they parked in the front of the gallery (it has a garage door). The trio then proceeded to a roped-off area in the back, where they sat on a black leather couch, drank champagne from plastic glasses and shouted orders at assistants while being filmed by fake paparazzi.

On the wall behind them hung a single painting embracing the same theme: a heroic portrait of Powhida in sunglasses, blonde at his feet and bottle in his hand. A white dove takes flight from his open palm, ascending towards the heavens.

The stand-in was funny, raving like the egotistical artist he was supposed to be, berating his assistants and telling adroit artist Tom Sanford -- the actual painter of the Powhida portrait -- "you're nothing, you're nobody!"

Throughout the opening’s absinthe-drenched merriment, Powhida himself -- who has a show, presumably of real art, coming up this fall at Postmasters -- was nowhere to be seen.

Last Thursday, Daniel Reich Gallery on West 23rd Street put on an even wackier show, opening a one-night only spa that afforded a taste of luxury to those of us who aren’t VIPs. Dubbed "Fucknails," the salon boasted inflatable pool chairs, a half-naked DJ spinning ambient jams and flamboyant spa attendants in booty shorts, who cruised around on shoes fashioned from Croc sandals glued atop rolls of toilet paper.

Batting their lashes, the boys served fluorescent cocktails with curly straws -- vodka and Gatorade, for the electrolytes -- and provided gallery visitors one of three free services. In addition to “third-eye” facials and tanning in a black-light tanning booth (a zippered IKEA closet), the salon offered the eponymous fucknail: one long, pointed plastic appliqué, applied to finger or toe.

Who were these people and what were they doing? I couldn’t tell, but at least the mani-pedi soak tub was teeming with live goldfish.

As July melts into New York August, you can also find the conventional summer group show, of course -- often with a gnomic title. It’s “Third Order” at the Charles Bank Gallery, opened last fall by Adam Charles Greenberger and Michael Bank Christoffersen in the ground floor of a new condo building next to the graffiti-clad neo-classical Germania Bank Building on the corner of Bowery and Spring Street.

A “third order,” according to Wikipedia, consists of persons who lead a monastic life in the everyday world. The South African artist Mikaela Bradbury, who has studied anthropology, scrawls feverish graffiti in obsessive rows on sketchbook paper. Passionate exclamations of sensation like “oh!” and “aha!” mingle with text-message acronyms like “lol” in a kind of digital-era delirium.

You could say there’s something monastic about the meticulous, minimalist paintings of New York artist Adam Henry, too. In Path, he flips the standard practice of canvas as under-layer, pigment as over-layer -- and instead weaves polymer color into the jute’s holes so that background and foreground mingle, pulse and even seem to swap places. Rainbow hues emerge through the fibrous material, which is stretched over the canvas, and the difficulty in seeing just what sits on top of what creates a disarming optical illusion.

At the sunlit, two-floor Dodge Gallery on Rivington Street, founded in April 2010 by Kristen Dodge, is “Shakedown” -- which refers, I presume, not to extortion but to the process of completing the gallery’s first year. Fans of painting can check out the series of richly textured, worked abstractions in subtly modulated hues of black, gray and pink by Jane Fox Hipple, or recent RISD graduate Ted Gahl’s Sleepwalking, a large oil whose brilliant fields of Ernst Ludwig Kirchner-like colors stopped me dead in my tracks.

Most interesting of all, though, is a strange installation by Doug Weathersby, aka Environmental Services, who actually rents himself out as a handyman and documents his projects as his artwork. He’ll do cleaning and home repair, plumbing and carpentry, or even art installations on-site -- and then sell you his record of his labors. A “Full Project Report” includes photographs, video and all of his “daily project logs.” The price? $2,000 and up. Is it cheaper or more expensive than hiring non-artistic help?

At Dodge, three of these daily project logs are on view: each photograph documents a given site or project -- a repaired sink, an old tool shed -- and Weathersby’s live-journalesque text, which frequently expresses seemingly genuine frustration -- “I really don’t want to do this today” -- or his anticipation of lunch (a highpoint for laborers), is printed over the image.

It’s all about the conundrum of class in the fine art world, a problem we see taken up in “The Workers” at MASS MoCA, as well.

The group exhibition at Hendershot Gallery on Chrystie Street is called “Of Memory and Time,” a more generic title. But it does feature something unique: music by cellist Christopher Lancaster, who works with dancer Bill T. Jones, composed specifically to accompany the show’s artworks. Playing on loop in headphones that are installed throughout the gallery, the music enhances the experience of looking at art -- or at least recalls the movies, where a swoony soundtrack always backgrounds a cinematic romance.

The 11 artists in the show include Arman, Richard Bosman and Christopher Brooks, whose fantastically scruffy portraits of bespectacled, seated men are installed on the seats of actual chairs that have been affixed to the gallery wall.

Marie Vic’s wall-hung sculptures of lacquer-stiffened blue corduroys or a patent-leather shoe -- stuck into white blocks of smooth, hardened resin that recall the surface of a frozen lake -- are eerie in their suggestion of a missing child. Their musical accompaniment is aptly titled Arctic Lullaby.

Still on Chrystie Street, the untitled show at Lehmann Maupin Gallery, featuring work by Gilbert & George, Tracey Emin and Juergen Teller, is all about sex. Emin in particular demonstrates her continued mastery of vulgar -- and some might say debased -- exhibitionism.

Framed in the entryway is Untitled (9 Rosettes), a selection of hand-sewn “first-place” ribbons in shades of rose and crème silk. Tattered and seemingly faded by the sun, the ribbons are appealing the way worn, vintage objects at flea markets are -- until you get closer and read the messy cursive she has scrawled in the center of each, illustrated by lewd drawings. “Now which way?” reads one, above a sketch of a naked woman on hands and knees. “Good Spread,” reads another.

The large gallery features two more noteworthy works by Emin: framed white, woolen blankets that have been embroidered with sketchy self-portraits of the artist sprawled nude, much-traveled images that some will remember from the British Pavilion at the 2007 Venice Biennale. “You made me feel like nothing,” reads the stitched caption on one of them in black thread, a nimble, gestural adaptation of Gustave Courbet’s The Origin of the World (1866). Although troubled and melodramatic, they are beautiful and restrained.