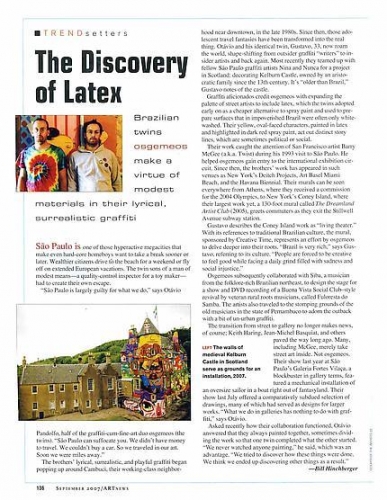 The Discovery of Latex
By Bill Hinchberger


São Paulo is one of those hyperactive megacities that make even hard-core homeboys want to take a break sooner or later.  Wealthier citizens drive to the beach for a weekend or fly off on extended European vacations.  The twin sons of a man of modest means--a quality-control inspector for a toy maker--had to create their own escape.

"São Paulo is largely guilty for what we do," says Otávio Pandolfo, half of the graffiti-cum-fine-art duo osgemeos (the twins). "São Paolo can suffocate you.  We didn't have money to travel.  We couldn't buy a car.  So we traveled in our art.  Soon we were miles away."


The brothers' lyrical, surrealistic, and playful graffiti began popping up around Cambuci, their working-class neighborhood near downtown, in the late 1980s.  Since then, those adolescent travel fantasies have been transformed into the real thing.  Otávio and his identical twin, Gustavo, 33, now roam the world, shape-shifting from outsider graffiti "writers" to insider artists and back again.  Most recently they teamed up with fellow São Paulo graffiti artists Nina and Nunca for a project in Scotland: decorating Kelburn Castle, owned by an aristocratic family since the 13th century.  It's "older than Brazil," Gustavo notes of the castle.

Graffiti aficionados credit osgemeos with expanding the palette of street artists to include latex, which the twins adopted early on as a cheaper alternative to spray paint and used to prepare surfaces that in impoverished Brazil were often only white-washed.  Their yellow, oval-faced characters, painted in latex and highlighted in dark red spray paint, act out distinct story lines, which are sometimes political or social.


Their work caught the attention of San Francisco artist Barry McGee (a.k.a. Twist) during his 1993 visit to São Paulo. He helped osgemeos gain entry to the international exhibition circuit.  Since then, the brothers' work has appeared in such venues as New York's Deitch Projets, Art Basel Miami Beach, and the Havana Biennial.  Their murals can be seen everywhere from Athens, where they received a commission for the 2004 Olympics, to New York's Coney Island, where their largest work yet, a 130-foot mural called The Dreamland Artist Club (2005), greets commutes as they exit the Stillwell Avenue subway station.

Gustavo describes the Coney Island work as "living theater."  With its references to traditional Brazilian culture, the mural, sponsored by Creative Time, represents an effort by osgemeos to delve deeper into their roots. "Brazil is very rich," says Gustavo, referring to its culture. "People are forced to be creative to feel good while facing a daily grind filled with sadness and social injustice."


Osgemeos subsequently collaborated with Siba, a musician from the folklore-rich Brazilian northeast, to design the stage or a show and DVD recording of a Buena Vista Social Club-style revival by veteran rural roots musicians, called Fuloresta do Samba.  The artists also traveled to the stomping grounds of the old musicians in the state of Pernambuco to adorn the outback with a bit of un-urban graffiti.

The transition from street to gallery no longer makes news, of course: Keith Haring, Jean-Michel Basquiat, and others paved the way long ago. Many, including McGee, merely take street art inside.  Not osgemeos.  Their show last year at São Paulo's Galeria Fortes Vilaça, a blockbuster in gallery terms, featured a mechanical installation of an oversize sailor in a boat right out of fantasyland.  Their show last July offered a comparatively subdued selection of drawings, many of which had served as designs for larger works. "What we do in galleries has nothing to do with graffiti," says Otávio.


Asked recently how their collaboration functioned, Otávio answered that they always painted together, sometimes dividing the work so that one twin completed what the other started.  "We never watched anyone painting," he said, which was an advantage.  "We tried to discover how these things were done.  We think we ended up discovering other things as a result."