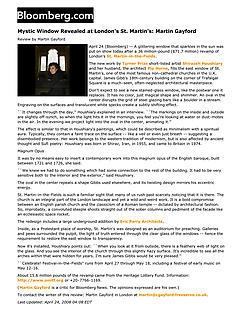 April 24 (Bloomberg) -- A glittering window that sparkles in the sun was put on show today after a 36 million-pound ($71.7 million) revamp of London's St. Martin-in-the-Fields.

The new work by Turner Prize short-listed artist Shirazeh Houshiary and her husband, the architect Pip Horne, fills the east window of St. Martin's, one of the most famous non-cathedral churches in the U.K. capital. James Gibb's 18th-century building on the corner of Trafalgar Square is a much-seen, often-neglected architectural masterpiece.

Don't expect to see a new stained-glass window, like the postwar one it replaces. It has no color, just magical shape and shimmer. An oval in the center disrupts the grid of steel glazing bars like a boulder in a stream. Engraving on the surfaces and translucent white specks create a subtly shifting effect.

``It changes through the day,'' Houshiary explained in an interview. ``The markings on the inside and outside are slightly off-synch, so when the light hits it in the mornings, you feel you're looking at water or dust-motes in the air. In the evening we project light into the oval in the center, animating it.''

The effect is similar to that in Houshiary's paintings, which could be described as minimalism with a spiritual aura. Typically, they contain a faint trace on the surface -- like a veil or even just breath -- suggesting a disembodied presence. Her work belongs to the western tradition of modernism, but is also affected by ancient thought and Sufi poetry: Houshiary was born in Shiraz, Iran, in 1955, and came to Britain in 1974.

It was by no means easy to insert a contemporary work into this magnum opus of the English baroque, built between 1721 and 1726, she said.

``We knew we had to do something which had some connection to the rest of the building. It had to be very sensitive both to the interior and the exterior,'' said Houshiary.

The oval in the center repeats a shape Gibbs used elsewhere, and its twisting design mirrors his eccentric energy.

St. Martin-in-the-Fields is such a familiar sight that many of us rush past scarcely noticing that it is there. The church is an integral part of the London landscape and yet a wild and weird work. It is a bold compromise between an English parish church and the classicism of a Roman temple -- dictated by architectural fashion. So, improbably, a convoluted steeple shoots straight out of the sober columns and pediment of the facade like an ecclesiastic space rocket.

Inside, as a Protestant place of worship, St. Martin's was designed as an auditorium for preaching. Galleries and pews surrounded the pulpit, the light of truth entered through the clear glass of the windows -- hence the requirement to restore the east window to transparency.

Now it's installed, Houshiary points out: ``When you look at it from outside, there is a feathery web of light on the glass. And you see the interior of the church through this slightly hazy surface. It's incredible to see all the arches within that were hidden for years. I'm sure James Gibbs would be very pleased.''