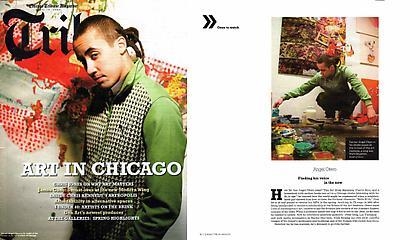 Finding his voice in the now

How far has Angel Otero come? This far: from Bayamon, Puerto Rico, and a household with neither books nor art to a Chicago studio brining with both. At age 7 he learned how the world might be represented when a neighborhood girl showed him how to draw the fictional character “Hello Kitty.” Now he is 23 and poised to receive his MFA in the spring. Arriving in Chicago in 2006 after being and picked to receive a scholarship at the School of Art Institute. Otero knew little of contemporary art, content to ape the drizzles and scrawls of the Abstract Expressionists of the 1950s. When a professor asked him how it felt to live in the 1950s he decided he needed to update. Now he references painterly painters-Peter Doig, Luc Tuymans- and such media mixmasters as Rachel Harrison, while forging his own style: colorful images of his island’s landscapes and buildings and of the women who raised him recur.
However far he has traveled he’s destined to go even further