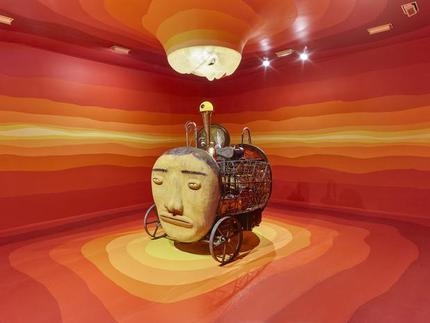 The Brazilian twins Gustavo and Otavio Pandolfo, better known as the artist team OSGEMEOS, are well-known São Paulo street artists inspired by US hip-hop culture. In recent years, they have established an international reputation for their paintings, sculptures, drawings, and multi-media installations featuring an array of distinctive cartoonish characters, and an evocative form of narrative and whimsical allegory.

Created especially for lucky New Yorkers, “Silence of the Music” is an unabashed, site-specific gallery show. Even if you are vehemently opposed to the notion of art-as-spectacle, the exhibition succeeds on a number of serious levels. OSGEMEOS are not out simply to entertain, although with its colorful pageantry, and live music interludes during its run, the show certainly does that.

Several rooms in the exhibition offer immersive installations, including one featuring The Illuminated (2015) a life-size male figure in the center of the room, nonchalantly rotating on a revolving platform. Surrounding the sculpture, a site-specific mural covering all walls shows an evocative scene conjuring enchanted oceans and exotic beaches. Even more striking is the room centered by a sculpture titled The Kiss (2015-2016). Here, against surrounding murals of undulating horizontal bands of warm orange, red and yellow tones, the main component, with a sunburst “face,” rests on the floor and doubles as a strange musical instrument. Attached to the ceiling just overhead, a glowing lunar “face” with puckered red lips offers a celestial kiss. The hallucinatory dream sequences represented by these two rooms complement the fanciful, street-savvy urban imagery of many of the large panel paintings on view elsewhere in the show.