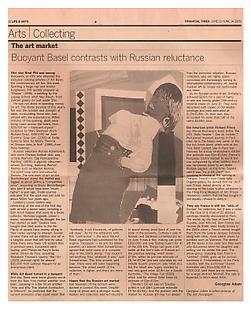 Film star Brad Pitt was among thousands of VIPs who attended the exclusive opening preview of Art Basel, the contemporary art fair, this week. Sporting a beige cap and Aviator sunglasses, Pitt quickly snapped up "Etappe" (1998), a painting by the Leipzig School artist Neo Rauch, from Zwirner gallery for just under $1m.

He was not alone in spending money on art. The divine surprise of this year's fair was the number and strength of sales, confounding those who had arrived with low expectations. Within minutes of the opening, deals were being made across the board, from $28,000 for a foam-and-crystal sculpture by Marc Swanson (from Richard Gray), $450,000 for John Currin's "Grey Girl" (2009) at Sadie Coles to $6m for Miró's "Femme et Oiseaux dans la Nuit" (1968) from Helly Nahmad.

Russian billionaire Roman Abramovich, who owns Chelsea football club, was circling Warhol's "Big Retrospective Painting" (1979), a gigantic silkscreen almost 11m long, featuring Warhol themes such as Marilyn Monroe, Campbell soup cans and colourful flowers. The sole work of art on the Bischofberger stand, the Warhol was tagged at about $74m, a "competitive price", according to Bruno Bischofberger, who said it would have been "much higher" a year ago. Trade sources indicated that the work had last sold for about $80m four years ago.

London's Lisson Gallery was celebrating at the end of the first day with almost a dozen sales, including a £1m Anish Kapoor that went to a Swiss collector. Nicholas Logsdail, Lisson's owner, explained why he thought the fair had started so well: "Dealers have bought their best works to the fair. Plenty of people have money sitting in their banks earning no interest. Sooner or later there will be inflation, and art is a tangible asset that will hold its value." While there were fewer US visitors than in previous years, Europeans were buying, with Phillips de Pury's Swiss owner, Simon de Pury, acquiring Mickalene Thomas's sparkly "Keri On" (2009, pictured right) for around $65,000 from Lehman Maupin for an anonymous client.

While Art Basel turned in a buoyant first day, there were some gloomy words from the New York market watcher Josh Baer. Speaking in a fair forum entitled "How and Why This Market Contraction is Different", he predicted that the current economic crisis could mean that "hundreds, if not thousands, of galleries will close". As for the difference with this "contraction" – the word the Art Basel organisers had substituted for the original "recession" – he and his fellow panellist, art adviser Allan Schwartzman, agreed that sales came to a complete stop in the 1990s slump. "You couldn't sell anything then, whatever it was," said Schwartzman. This time around, said Baer, there were still sales happening because "the actual wealth of the collectors is higher, and there are more of them."

Hopes that the Russian art market had bounced off the bottom were dashed in London this week. Despite rising oil prices and a stronger rouble, dealers and collectors seemed reluctant to spend money amid fears of over the state of the economy. Sotheby's sale of Russian and Ukrainian contemporary art on June 9 was a flop, making just under £900,000 and only finding buyers for 41 of the 109 lots. Things had gone a bit better at the firm's sale of Russian art the previous evening, which made £7.9m, within its pre-sale estimate of £6.7m-£9.9m (pre-sale estimates do not include buyers' premium; sale totals do). But the result was hugely boosted by one very good price, £2.8m for a bucolic Kustodiev, "The Village Fair (1920), which sold for almost three times its estimate of £1m-£1.5m.

Christie's 197-lot sale on Tuesday pulled in just £4m (pre-sale estimate £3.3m-£4.9m). And the problem with the market for Russian art may run deeper than the economic situation. Russian collectors, who are highly brand-conscious, are increasingly turning to international contemporary art, seeing Russian art as simply not fashionable any more.

As for Russian works of art, Sotheby's achieved £2.6m for a pair of highly ornate and heavily gilded 19th-century Imperial vases on June 10. They were decorated with copies of Old Master paintings and were estimated at £1.2m-£1.8m. On their own, they accounted for more than half of the sale's £4.68m total.

Did American artist Richard Prince buy Marcel Duchamp's scent bottle, the 1921 "Belle Haleine – Eau de Voilette"? Well-placed museum sources in Paris claim he is the happy new owner of the tiny but iconic piece, which sold at the Yves Saint Laurent sale in Paris last February for a truly stratospheric €8.9m (the estimate was €1m-€1.5m). France's Pompidou Centre wanted to buy it but was out-gunned by other bidders and it was hammered down to art dealer Philippe Ségalot. At the time, Ségalot said it was "for a US client" but, speaking in Venice at the opening of François Pinault's new Punta della Dogana gallery, he denied that his client was Prince. Asked directly at the opening of the Louis Vuitton exhibition in the Hong Kong Museum of Art, Prince refused to confirm that he had bought it but equally refused to deny it.

They say France is still the "attic of Europe" for collectors, but it was a cellar in the case of a trove of 22 abstract paintings recently discovered in Paris. The works, by the likes of Jean-Paul Riopelle, Joan Mitchell, Sam Francis and Nicolas de Staëll, were hardly known in the 1950s when a French dentist bought them from the Galerie Jacques Dubourg, along with other, more classic works by painters such as Vlaminck. The dentist left the works in his cellar and they were only discovered when his daughter was sorting out his estate this year. The whole group, including Sam Francis's "Untitled" (1958), goes up for auction on Sunday in Fontainebleau, in the Paris suburbs, with the auctioneer Osenat. Estimates vary from €50,000 to €900,000 (and there are no reserves), for a large abstract Mitchell. The sale is expected to fetch about €4m.

Georgina Adam is editor-at-large of The Art Newspaper