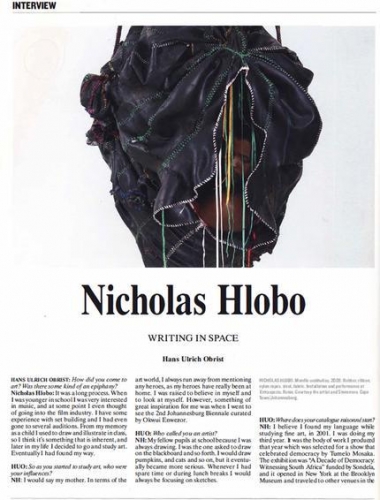 HANS ULRICH OBRIST: How did you come to art? Was there some kind of an epiphany? Nicholas Hlobo: It was a long process. When I was younger in school I was very interested in music, and at some point I even thought of going into the film industry. I have some experience with set building and I had even gone to several auditions. From my memory as a child I used to draw and illustrate in class, so I think it's something that is inherent, and later in my life I decided to go and study art. Eventually I had found my way.

HUO: So as you started to study art, who were your influences?
NH: I would say my mother. In terms of the art world, I always run away from mentioning any heroes, as my heroes have really been at home. I was raised to believe in myself and to look at myself. However, something of great inspiration for me was when I went to see the 2nd Johannesburg Biennale curated by Okwui Enwezor.

HUO: Who called you an artist?
NH: My fellow pupils at school because I was always drawing. I was the one asked to draw on the blackboard and so forth. I would draw pumpkins, and cats and so on, but it eventu­ally became more serious. Whenever I had spare time or during lunch breaks I would always be focusing on sketches.


HUO: Where does your catalogue raisonné start?
NH: I believe I found my language while studying fine art, in 2001. I was doing my third year. It was the body of work I produced that year which was selected for a show that celebrated democracy by Tumelo Mosaka. The exhibition was ''A Decade of Democracy: Witnessing South Africa" funded by Sondela, and it opened in New York at the Brooklyn Museum and traveled to other venues in the United States before coming back to South Africa the following year. I started exploring unconventional materials and using stitching as a technique, as an addition to the stories I was telling. Of course it was in 2006, when I had my first solo exhibition at Michael Stevenson, that I really introduced myself to the art world.

HUO: From the beginning you have been using Xhosa as a language for your titles. Can you talk about it?
NH: My work and the subjects are anchored in my South African identity, and I constantly look at myself and at what it means to be me and to belong to this part of the world. The nationality I feel I belong to, being South African, and how it relates to the world. I'm telling a story about all my identities, so I use the language. It's not the first time it is used; I am retelling it as though a dancer or musician, where you need to find the voice and the movement in order to fit into this big group telling the story with your own interpretation. The use of Xhosa language is about the process of trying to rediscover and understand this language. For example, if one were to ask me to go into detail about my work in Xhosa, I don't have a good enough vocabulary. I prefer to talk about my work in English. The languages and cultures are constantly evolving. English is still very pre­dominant and most artists use the English language to title their works. It is a language that continues to be bolder and bolder, and many cultures are taking it in. When I was still studying, I realized I didn't know Xhosa as well as I should.

HUO: So you write in space?
NH: Yes. I write with objects and sketch with words. Eventually those words get translated into objects. It's a very common, conventional way of approaching a drawing. It's something that resembles an idea about an object, of what it should look like. I don't know if we have the image of the Visual Diary here, but I feel that when drawing with words you don't reveal everything.


HUO: This Visual Diary is a very large work from 2008.
NH: It's sort a sketchbook, made of stitching and drawing. There is more text and writing than sketches actually.


HUO: And what is the writing?
NH: Several things. I think the idea grew when I was in my old studio. When an idea came I would run to write quickly on the wall. Keeping the diary on the canvas was a way of preserving all those thoughts, all those notes that I'd need to remember at some point. Some people in galleries said they were drawings. But it isn't a drawing. It's my diary.


HUO: These moleskins are amazing.
NH: I cut, stitched and also did some writing.


HUO: These are all with handwriting and hand­made. Does the computer play a role in your process at all?
NH: No, I feel in that sense I'm very old fash­ioned. I believe in the power of my mind and in my fingers. I am neither against comput­ers as such and nor do I feel threatened by them, but I enjoy employing a childlike ap­proach. A child is not from the digital age; a child is archaic in that sense. A child is one who just dreams and looks around at what is happening.


HUO: The childhood thing is interesting. In an interview with Joost Bosland, you said child­hood was the best time of your life.
NH: True. Children tend to fanaticize and make things that do not exist and you believe in them. I think the world viewed that way is more beautiful; you are not tarnished with the realities of living. As a child you think life is beautiful. It's like a game, and each minute is an adventure. When you're old you realize how hard it is, that most things don't come easily and that you have to work hard for what you need. When you're a child you expect everything to be there; there's a high level of innocence. Adults tend to have facades and it can be very pretentious.


HUO: The writer Robert Louis Stevenson said art is like playing, but playing with the serious­ness of playing children.
NH: Yes. And I can never be a child, but I like to try to imagine what it's like. When you're older people might think that you've gone mad, which is also interesting - this idea of being in a mad - like a state of mind.


HUO: You 're writing in space, not only with drawings and stitching, but also with physical objects, which are like altered ready-mades. You often use colonial furniture, colonial architec­ture and design. There is the colonial chair for example. And in Iqinile, Ikhiwane and Bhaxa (2006) there is a sofa. How do you choose these ready-mades?
NH: I look at all my identities - my ethnic­ity, my gender, my age, my cultural identity. I look into the things that built this country to be what it is. This is the South African style of ball and claw. Many countries have their ball and claw. America and Europe had it, but in South Africa, that was a particular style, it was very popular. It's furniture that makes reference to the furniture design in this country, and to someone who is not South African they would not get the point or the association. I am making references to the history of design in this country but also the idea of sitting - the concept of sitting down on things. Whatever you feel is embarrassing or not to be spoken about you slip under the carpet, sit on it and squash it down.


HUO: One thing I was curious about is the notion of performance. We have spoken about sketches and objects, but what about pe,for­mance?
NH: My first performance was called Igqirha Lendlela (2005). It's in reference to a folk song that was made by Miriam Makeba. As a sculpture or as a performance it looks at South African cultural baggage. Wherever you go and introduce yourself to people, most people tend to ask about politics: "Do you still have apartheid?" etc. There's an invis­ible backpack that follows you; sometimes you're conscious of it, sometimes you're not, sometimes it's heavy, sometimes it's not. You know, dung beetles, once they have found dung, they roll it back together - it's this idea of movement. I am interested in looking at language, how rich it is, how it behaves as secular. It studies nature and it studies the tiniest creatures. We don't have to look at huge creatures in order to learn; even small creatures can teach us a thing or two.


HUO: And then you took off with performance. Can you tell me about Dubula (2007)?
NH: That was at Extraspazio in Rome. And all the webs looked at the idea of representing the body. If you allow the body to give some life to the sculpture ...

HUO: You can activate the sculpture? Like Franz West, the Austrian sculptor, he would say the body activated the sculpture.
NH: Yes. The title Dubula plays reference to all sorts of things such as the perceptions around the black male body. The title means to blossom, explode or erupt. There is this appendage that is attached around the genital area. It almost becomes an expansion of the penis. It becomes sexualized in a way and at the same time not. I thought about Rome, I thought about the colors and the history of Rome, and the games that took place in the coliseum and how people came from various parts of the world to be a spectacle - to fight to the death and to be heroes.

HUO: You told me that pe,formances are sculptures in motion. That is true for most of the pe,formances, then you did Ungamqhawuli in 2008. That's actually a very still sculpture.
NH: The line or plot that I'm following seems to be more evident at Michael Stevenson. The first exhibition was "Izele" and the second was "Kwatsityw'iziko." The first was about birth: someone had given birth, or something had been added to the number that was there. And during my second solo exhibition, we had an installation for why we had birth in the first place. So there is this line that I follow through these exhibitions. This performance, Ungamqhawuli, explored the idea of a child who is now growing up.

HUO: One thing I was curious about is whether you have any unrealized projects? Dreams? Utopias?
NH: There are a lot. I find the future to be very fascinating, as the future allows you to dream. You realize some of the things you dream. There are several things that are in line with growing up as an artist as a human being, such as where I'd like to see the work going. Some of those fantasies are controlled by the present and by the past. There are things that are simmering in a pot, that are be­ing dreamt, whether I'm awake or asleep. Like I do often when projecting myself into the future and look at tomorrow before it even gets to tomorrow. When we get to tomorrow and it's not exactly the way we thought it would be it's not the end of the world; we try and dream some more and try other things.

HUO: So the dream is the future, and the future is the dream?
NH: Yes, and the present could also be the dream.